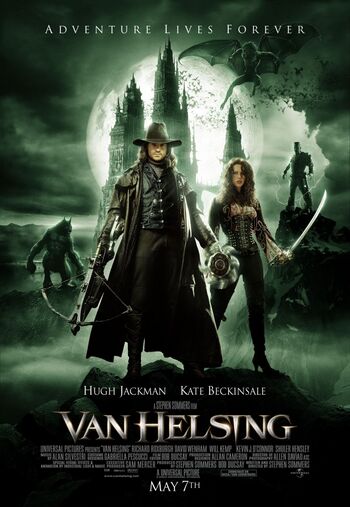 Not to be confused with Hellsing

At least, that's the theory behind Van Helsing (2004), which stars Jackman as fabled vampire hunter Van Helsing. In this incarnation, he works as an agent of the Knights of the Holy Order in the Vatican to hunt down monsters and other abominations. Aiding him is Friar Carl, a slightly irreverent tinkerer and inventor that supplies him with the specialty equipment and comic relief he needs to take down the creatures of the night.

Yeah. It's just that kind of movie.

Van Helsing and Friar Carl are sent to Transylvania to help the last of the Valerious family, Anna and her brother Velkan, destroy Dracula - because if they don't, several generations of the family will never get to heaven. Once there, Van Helsing finds himself facing down Dracula and his brides, werewolves, and even Frankenstein's creation in the course of his mission - and discovering a few secrets about his own past, with plenty of Universal Horror / Hammer Horror Shout Outs along the way.

A reboot is currently in the works, to possibly be written by the writing team behind the Transformers Film Series.

Tropes used in Van Helsing include:
Retrieved from "https://allthetropes.org/w/index.php?title=Van_Helsing&oldid=1767377"
Categories:
Cookies help us deliver our services. By using our services, you agree to our use of cookies.