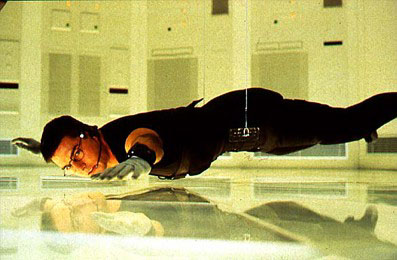 A series of films based on the classic Mission: Impossible series. The movies were made as continuations of the original, meaning they were not repeats of the same characters but mostly new characters working for the same agency.

Tom Cruise headlines each film as ace IMF agent Ethan Hunt and Ving Rhames plays Luther Stickell, Ethan's go-to guy for Mission Control and computer hacking. Each film outlines an Impossible Mission Collapse of varying kinds and it usually involves the heroes trying to fix the mess that has developed (often with regular violence, something the original show purposefully avoided).

Because of the higher action quotient, dominant focus on Cruise rather than the entire team and some liberties taken with previously existing characters, there has been a sizable backlash regarding fans of the original series. Still, the films have been embraced by general audiences and elements unique to them alone have become embedded in modern popular culture. They all have different themes and tones, too; they don't simply use a Reset Button and each film isn't mere Sequel Escalation.

Mission Impossible (1996) - Jim Phelps (Jon Voight) is called upon for a new assignment dealing with very sensitive information regarding IMF agents and their cover IDs. He brings in his standard crew, including point man Ethan Hunt, and they plan out how to recover the info. Unfortunately, their mission was compromised horribly and Ethan finds himself the lone survivor and the top suspect as a traitor. The discovery of two other survivors doesn't alleviate his paranoia, so he goes into the list of blacklisted former IMF agents to put together another team to get to the bottom of their original mission and the conspiracy behind it. Directed by Brian DePalma, the movie became well known for the interweaving and complicated plotting. (And the signature image pictured above) This is the least violent Mission Impossible film, by far. And given that you can clearly see an eye gouging for a few frames and that it's indeed directed by that Brian DePalma, that's saying something.

Mission Impossible II (2000) - Ethan is snagged out of a vacation to track down a rogue IMF agent (Dougray Scott) who has stolen a very dangerous virus and has malicious plans for it. He is sent to recruit a Classy Cat Burglar and ends up falling for her. That is made all the more complicated when he learns that she is an ex-girlfriend of the rogue agent and the agency wants her to infiltrate his group. Ethan has to put aside his personal feelings as he tries to stay one step ahead of his rival. Directed by John Woo and it is plain to see, as this film is far more stylized and action-packed, with less cloak and dagger than the first film or the franchise as a whole. It was more financially successful than the first film and had some favorable reviews, but was several steps further removed from the premise[1].

Mission Impossible III (2006) - Ethan is in semi-retirement, only training new agents, and is engaged to Julia Meade, a nurse who thinks he works for the Virginia Department of Transportation. He is convinced to come out of retirement when he learns that one of his students has been captured. After the simultanous success and failure of that mission they learn that she was tracking down the whereabouts of an elusive arms dealer named Owen Davian (Philip Seymour Hoffman) and that he is looking for an unspecified item known as the "Rabbits Foot." The big-screen directing debut of J.J. Abrams (who also co-scripted and did a bit of digital work), this film falls back to cloak-and-dagger tricks, with the action being more through time-frame constrictions or compromised missions, and even takes time to develop its characters. It got better reviews than the first two and is considered more faithful to the concept of the original series because of its focus on a team instead of Tom Cruise.

Mission Impossible: Ghost Protocol (2011) - A mission to infiltrate the Kremlin goes awry when a massive bomb goes off, Ethan's team being framed for the act and the resulting political backlash ends up shutting down the entire IMF under operation 'Ghost Protocol'. Basically the only ones left, they must operate without their normal resources and backup while clearing their names and stopping the real culprit's darker goal. Directed by Brad Bird in his live-action directorial debut, J.J. Abrams stayed on as a producer, Tom Cruise and Simon Pegg return joined by Jeremy Renner and Paula Patton with Josh Holloway and an unbilled Tom Wilkinson in supporting roles. The film has received very positive critical reviews for the deft action sequences and a strong return to the team-focused nature of the series. This film is less about Ethan Hunt than the previous three (hence the lack of sequel number). It also did a lot to redeem both the Mission Impossible movies and Tom Cruise in the eyes of the public.

Mission Impossible: Rogue Nation (2015) - Directed by Christopher McQuarrie. Ethan Hunt is on the run from the CIA, following the IMF's disbandment as he tries to prove the existence of the Syndicate, an international criminal consortium.[2]

This series is also the Trope Namer for the famous "Mission Impossible" Cable Drop.

Retrieved from "https://allthetropes.org/w/index.php?title=Mission:_Impossible_(film)&oldid=1861251"
Categories:
Cookies help us deliver our services. By using our services, you agree to our use of cookies.