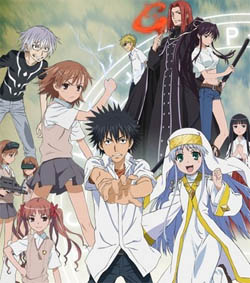 Every single one of these characters can kick your ass.

Touma Kamijou is just an extremely-unlucky Ordinary High School Student living in Academy City, a state-of-the-art city dedicated to the study of people with esper powers. He does, however, possess a not-so-ordinary power to dispel any esper powers with his right hand. His ordinary, if not unlucky, existence in Academy City is shattered when a girl dressed like a nun ends up on his balcony window, claiming to be on the run from magicians trying to kidnap her and claim the 103,000 forbidden grimoires that she possesses. Because of the girl called the Index Librorum Prohibitorum, he gets dragged into a world completely different from the scientific lifestyle of Academy City—the world of Magic.

Due to a combination of his terrible luck and the strange power of his right hand, he attracts the attention of both the Magic and Science factions, getting him dragged deeper and deeper into a secret conflict between the two sides. Along the way, he meets several other people, magicians and espers alike, unwittingly forming a combination of allies from both sides which just might tip the scales of conflict.

A Certain Magical Index (とある魔術の禁書目録 , "Toaru Majutsu no Indekkusu") is adapted by J.C.Staff from a series of Light Novels. The first half of the story has been completed at 22 novels and two short story volumes, and the second half is continuing under the title "New Testament". Several other short story volumes have been released, focusing on side characters which didn't get much spotlight in the original.

A spin-off manga entitled A Certain Scientific Railgun and a corresponding anime adaptation has been released, centering on Academy City's third-highest-ranked Level 5, Mikoto Misaka, and the daily life in Academy City.

A certain Fan Translation project for the light novels can be found here. The entire first half of the story and four other short story volumes have been fully translated, and translation of the "New Testament" series is currently ongoing.

A Certain Wiki may help in understanding various terminologies and powers that may appear here on this wiki.

The anime has been licensed and released by FUNimation entertainment, along with the movie and both seasons of A Certain Scientific Railgun.

A Certain Magical Index: The Movie – The Miracle of Endymion is a side-story that features Touma and Index, with many of the characters from both Index and Railgun appearing.

Since there are still novels which are yet to be adapted into anime, please tread carefully, lest you may be getting spoilers for future seasons.

Tropes used in A Certain Magical Index include:

Retrieved from "https://allthetropes.org/w/index.php?title=A_Certain_Magical_Index&oldid=1822224"
Categories:
Cookies help us deliver our services. By using our services, you agree to our use of cookies.