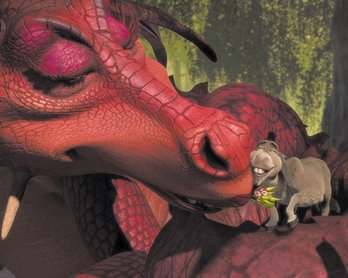 A romance, sexual or otherwise, between two different species. Sometimes they are humanoid aliens, and a Green-Skinned Space Babe is involved, or they can be a Friendly Neighborhood Vampire and a human, two Funny Animals, or a Beast and Beauty couple. The type of species can diverge greatly, so long as they are different.

May include a moral about the Fantastic Racism version of inter-racial romances. Also may be Star-Crossed Lovers, anyone looking for more built in angst will make one of these a Mayfly-December Romance. In less realistic settings, can easily result in Half-Human Hybrids or Hybrid Monsters.

Chances of it actually becoming an Official Couple (and evolving into a mixed marriage) are increased if the nonhuman has a human form, although that still doesn't take away the Squick for a steadfast minority of viewers. Most people accept it, though, if there are no humans involved, just two different animals. And since humans are animals, this can also be used to examine popular notions about morality. For anthropomorphic animals, this can be a source of Furry Confusion, especially if they're the only couple seen to be of different species.

For some this is the way to go about First Contact. Alien invaders seemingly love to tempt humans with this as part of their Masquerade, although you'd think they'd learn better.

No real life examples, please; Humans are the only sapients capable of romance on Earth.

See also: Extreme Omnisexual; But You Screw One Goat!; Mars Needs Women; Divine Date; Deus Sex Machina; Did You Just Romance Cthulhu?; Boy Meets Ghoul; and Improbable Species Compatibility for when you wonder how these two things could actually reproduce. May involve Exotic Equipment or the Male-to-Female Universal Adaptor. May lead to Half-Human Hybrids or to a Nonhuman Lover Reveal if one member was keeping secrets. If society does not approve of such romance, then it's also Maligned Mixed Marriage. Interspecies Friendship is the platonic version of this trope.

Examples of Interspecies Romance are listed on these subpages:
Retrieved from "https://allthetropes.org/w/index.php?title=Interspecies_Romance&oldid=1933943"
Categories:
Cookies help us deliver our services. By using our services, you agree to our use of cookies.