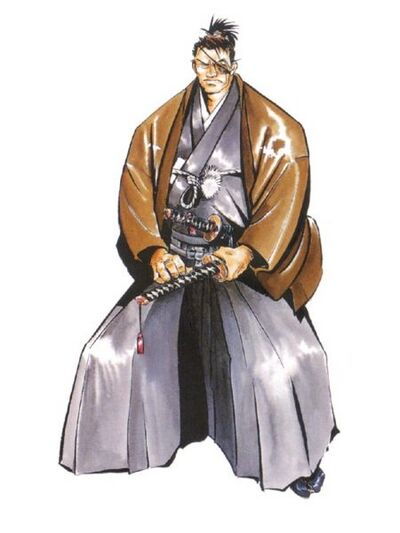 Quite possibly the most romanticized samurai in history, and the one with the greatest speculation about his life.

Not much about his life is known as solid fact. Both Jubei's father and grandfather had been great masters of swordsmanship. His grandfather was the founder of the Yagyu Shinkage school, which still exists today, and famous tales tell of him defeating armed samurai while barehanded and nearly 70 years old. His father was the personal swordsmanship tutor to three shoguns and was once said to have singlehandedly cut down seven assassins who attempted to slay the shogun at a battle. Jubei inherited their skill. By the age of 9 he was already showing signs of being a prodigy and was occasionally filling in for his father in the role of teaching swordsmanship to the Tokugawa shoguns.

At that point, however, is the first of several record lapses on Jubei. The next time any information about him is recorded is when he is 24, at which point he is considered the greatest swordsman of the famous Yagyu clan, but is summarily dismissed from the court at Edo with no reason or explanation given. Indeed, it is argued about whether he was dismissed by the shogun, perhaps for being too gruff and honest for politics at court, or whether he decided himself to leave on a warrior's pilgrimage. There is also debate about if this was a cover story for Jubei so he could work as a spy on behalf of the Shogunate.

For the next twelve years there is not a single record on the doings of Jubei, not even in the Yagyu family's private records (which contain lengthy passages about other members, especially from that time period, but next to nothing on Jubei), and even the book on swordsmanship and philosophy Jubei wrote later only contains hints. However, after twelve years of banishment, he suddenly reappeared at a swordsmanship demonstration the shogun put on, performed impressively, and was immediately reinstated and given a government job. After that his life was fairly quiet and not very long: he took control of the family lands for several years while his father grew sick and then died, wrote his book of swordsmanship and philosophy, and then, at the age of 43, died under circumstances as mysterious as much of his life (depending on which story you listen to, he either died of a heart attack at home, due to an accident while hunting, or, more darkly, was assassinated by one of his brothers).

Generally considered one of the greatest swordsmen of all time despite living in an era of relative peace, a Warrior Poet, a protector of the weak and upholder of the samurai code, and consistently portrayed as such in the many, many movies (Sonny Chiba alone probably played him a dozen different times in various movies and TV series), manga, and other stories about him. These are often far from historical (often they are closer to what we would consider outright fantasy, frequently involving Jubei fighting demons and would be conquerors of Japan), and include many details with little or no basis in fact, including Jubei being depicted as a wandering Ronin, a Ninja (or at least incorporating ninja philosophy/skills), having an Eyepatch of Power (although portraits from his own time show him with two eyes, the eyepatch legend has become so intertwined with the legends about Jubei that it is the default look for him, complete with multiple explanations about how he lost the eye -- the most popular being that his father accidentally struck him in the eye with a wooden sword when training a very young Jubei), just to start. One of the more interesting wrinkles is that his father is almost always an antagonist to him (Yagyu Munenori, Jubei's father, is probably the victim of Flanderization, since unlike his son he was a skilled politician as well as a swordsman, and this often means that depictions of him turn him into an Evil Chancellor, an Evil Counterpart to Jubei, or just a Jerkass villain).

Examples of Yagyu Jubei include: