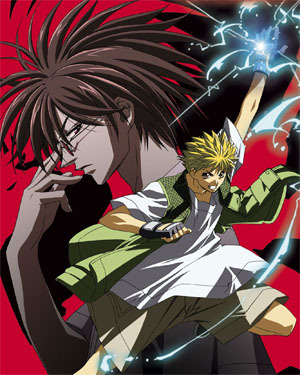 A 1999 manga that was adapted into an anime in 2002, Get Backers focuses on Ban Mido and Ginji Amano, two superpowered pals who run a repossession service to help people get their lost stuff back. Ginji's body can generate a powerful electrical current, and Ban has both a two kilo-newton grip (look it up) and the "Evil Eye", which can induce powerful hallucinations through eye contact.

They inevitably run into conflicts of interest (such as an equally superpowered "delivery service"), which they deal with by kicking ass. Though it starts out as a light-hearted Shonen action series, it later took a sharp right turn into Cerebus Syndrome country with the Limitless Fortress arc.

The anime was co-produced through Studio DEEN, who is famous for other series popular in America such as Fruits Basket, Ranma ½, and Rurouni Kenshin.

Tokyopop has pulled a Dragonball Z and is releasing the second half of the series as GetBackers: Infinity Fortress, starting with volume 26 (we think, anyway). Volume 3 of Infinity Fortress has been canceled, as Tokyopop no longer has the license to continue the translation.

This series has a character sheet. All character tropes should go there instead.

Tropes used in GetBackers include:

Retrieved from "https://allthetropes.org/w/index.php?title=GetBackers&oldid=1729157"
Categories:
Cookies help us deliver our services. By using our services, you agree to our use of cookies.