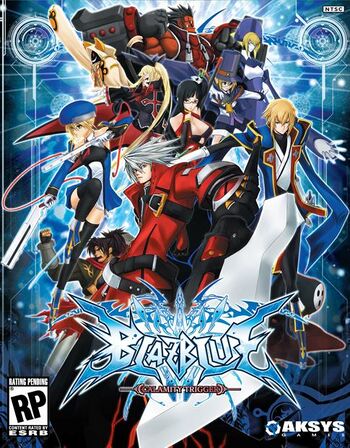 The Wheel of Fate is Turning...

BlazBlue, pronounced "blaze-blue", or "blay-blue" in Japanese, is a Fighting Game series by Arc System Works, and a Spiritual Successor to Guilty Gear. This series has about as large a fandom, if not more, as its technical daddy.

The main games of the series are the following:

A spin-off Visual Novel named XBlaze Code: Embryo was released in 2014, telling a story set 150 years before Calamity Trigger. The game was followed by XBlaze Lost: Memories in 2015.

A light novel entitled BlazBlue Phase 0 written by Komao Mako, illustrated by BlazBlue's lead artist Katou Yuuki and based on a story from BlazBlue creator Mori Tochimichi was published by Fujimi Shobo on August 20, 2010 [1]. The story begins when Ragna has a chance encounter with Caelica, a young lady harboring a mysterious power, and involves the mysteries of the BlazBlue world.

A sequel, entitled BlazBlue Phase Shift, was released in April 2011. This time the focus shifts to Yuuki Terumi, while also elaborating more on Nine and Trinity before she became Platinum.

An official monthly webcomic entitled BlazBlue Chimelical Complex by Haruyoshi Kob began on August 6 on Famitsu's Comic Clear website. It can be viewed here. Too bad it's written in Japanese.

This series has character sheets for each sub-series. Please place all character-specific tropes there.

Retrieved from "https://allthetropes.org/w/index.php?title=BlazBlue&oldid=1911112"
Categories:
Cookies help us deliver our services. By using our services, you agree to our use of cookies.