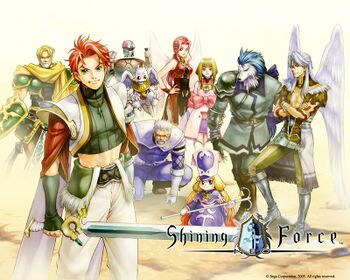 Shining Force is a series of turn-based strategy games, and is part of a larger franchise known simply as the Shining Series, and was arguably Sega's answer to Fire Emblem[1].

Shining Force begins in the kingdom of Guardiana, where the main character, Max, is put in charge of the titular Shining Force and charged with stopping an invasion from the rival Runefaust army. The army is controlled by Darksol, a mysterious cloaked man with aspirations to revive the monstrous Dark Dragon and use it to Take Over the World. It's a prequel to the first-person Genesis RPG Shining in the Darkness, which featured Darksol's son Dark Sol (or, in Japan, Mephisto).

Its sequel, Shining Force II, shifts the focus to the kingdom of Granseal, where an even greater demon lord named Zeon (No relation) is sealed off by two jewels. A thief named Slade steals one of them, and thus breaks the seal on the monster. Zeon possesses the king of the neighboring Galam nation, causing him to do all sorts of freaky Evil Overlord-type deeds. This time, schoolkid Bowie and his three friends (Sarah, Chester and Jaha) form the core of the new Shining Force, and are sent to track down the jewels before Zeon can wreak any further havoc on the world. Takes place in the same world as the first game, although at the time there was only a Continuity Nod to prove it. (This game also suffers from the naming problems of the previous ones, referring to Darksol as Dark Sol, and Lucifer as Dark Dragon, an unrelated enemy from Shining Force I).

The Shining Force Gaiden games were released on the Game Gear (the first one never made it out of Japan), but were later repackaged and enhanced for the Sega CD. Of those, the first one stars Prince Nick of Cypress, who has to help Anri (part of the original Guardiana Shining Force who ascended to become Queen) find a cure for her poisoning at the hands of a rogue wizard named Woldol. At first, the people of Guardiana are suspicious of him, but eventually he turns out to be a trustworthy and effective leader, thus gaining their respect.

The second Gaiden game (subtitle: The Sword of Hajya) stars Deanna of Cypress, a swordsman who is placed in charge of the Cypress branch of the Force while the Prince leads an invasion into Iom. However, with the Prince's right hand turned to stone, he is practically defenseless against the superior Iom forces, and can no longer use the Sword of Hajya that he used to defeat Woldol in the previous game, so he gets captured so he can be sacrificed to Iom. In that regard, Deanna and his team have to recover the Prince's lost sword, save the Prince, and help him bring down the Iom army once and for all.

The third Gaiden game, also never released outside of Japan, is entitled Final Conflict and ties the stories of the first two Genesis games together, as well as serving as a prequel to Shining Force II by showing how remnants of Max's team and the survivors of Dark Dragon's army came to Parmecia after his disappearance.

Shining Force III, a game in three installments where only one was exported to the US, has its own page.

Other games in the franchise include action RPGs like Shining Tears, Shining Force NEO and EXA, and the Shining Soul games on Game Boy Advance. A return to the strategy/RPG format has finally arrived in the DS game Shining Force Feather, which of course shows no signs of being released outside of Japan, and Shining Hearts has been announced for the PSP.

Shining Hearts also gets a Anime Adaptation that started airing in as a part of the Spring of the 2012s.

Recently, a letter writing/video-uploading/fan-art showing campaign has been started by the fan community to reunite developer Camelot with Sega in time for the series' 20th anniversary. More information and ways you can contribute can be found here https://web.archive.org/web/20131025001634/http://sos.shiningforcecentral.com/

The Shining Force games provide examples of:
Retrieved from "https://allthetropes.org/w/index.php?title=Shining_Force&oldid=1887536"
Categories:
Cookies help us deliver our services. By using our services, you agree to our use of cookies.