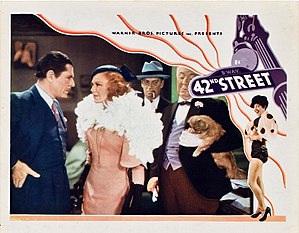 42nd Street is a 1933 Warner Bros. musical with songs by Harry Warren and Al Dubin. It stars Dick Powell as Billy Lawlor, and Ruby Keeler as Peggy Sawyer, a young actress struggling to make it big on Broadway. Also features Warner Baxter as Julian Marsh, the show's stressed-out director.

At a little less than 90 minutes, 42nd Street is a fast-moving picture that crackles with great dialogue and snappily plays up Busby Berkeley's dance routines and and the bouncy Al Dubin-Harry Warren ditties that include the irrepressibly cheerful "Young and Healthy" (featuring the adorable Toby Wing), "Shuffle Off to Buffalo" and the title number.

A famous Broadway director (Warner Baxter) takes on a new show despite his ill health, then faces disaster at every turn, including the loss of his leading lady on opening night. The film features Bebe Daniels as the star of the show and Berkeley regulars Guy Kibbee, Ginger Rogers, Dick Powell, and Ruby Keeler, whom Baxter implores, "Sawyer, you're going out a youngster, but you've got to come back a star!"

One of the earlier "show-within-a-show" movie musicals, it still holds up very well by today's standards.

Features tons of bizarre Busby Berkeley choreography, as well as a number of numbers that would literally be impossible to stage on... well, an actual stage. This set the precedent for Gold Diggers of 1933, Footlight Parade, and the other Warner musicals that immediately followed, made even more obvious by the fact that they all contained many of the same actors reprising similar roles.

Was adapted into a successful Broadway musical in 1980, with a revival in 2001.

42nd Street was added to the National Film Registry in 1998.

Tropes used in 42nd Street (film) include:
Retrieved from "https://allthetropes.org/w/index.php?title=42nd_Street_(film)&oldid=1994881"
Categories:
Cookies help us deliver our services. By using our services, you agree to our use of cookies.