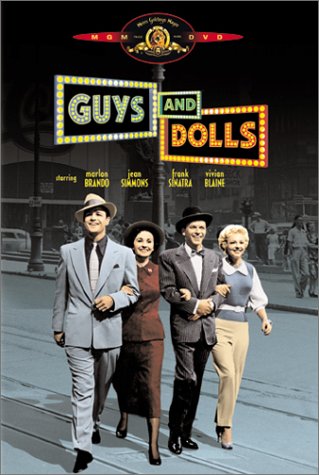 Guys and Dolls is a 1950 musical comedy with lyrics by by Frank Loesser and a book by Jo Swerling and Abe Burrows. It was based heavily on two short stories by Damon Runyon, "The Idyll of Miss Sarah Brown" and "Blood Pressure", with smaller elements from his other stories. The original Broadway production was nominated for five Tony awards, winning all of them, including Best Musical and Best Actor in a Musical (Robert Alda as Sky Masterson).

The plot centers on Sky Masterson, a chronic high-rolling gambler, and Sarah Brown, a mission worker in New York City. When fellow gambler Nathan Detroit finds himself in need of $1,000, Nathan bets Sky he cannot get Sarah to go to Havana with him. Hilarity Ensues. Other players include Adelaide, Nathan's long-suffering long-time fiancee, Sarah's uncle Arvide, and an ensemble of gamblers hanging around Nathan including Nicely-Nicely Johnson, Benny Southstreet, and Harry the Horse.

Most famous song is "Luck Be a Lady", with "Sit Down, You're Rocking the Boat" in a close second.

Adapted into a movie in 1955, with Marlon Brando as Sky, and Frank Sinatra as Nathan.

Tropes used in Guys and Dolls include:

Sky: "I suppose one of these days you'll be getting married."
Nathan: "We all gotta go sometime."
Sky: " But, Nathan, we can fight it. The companionship of a doll is pleasant even for a period running into months. But for a close relationship that can last through our life, no doll can take the place of aces back to back."