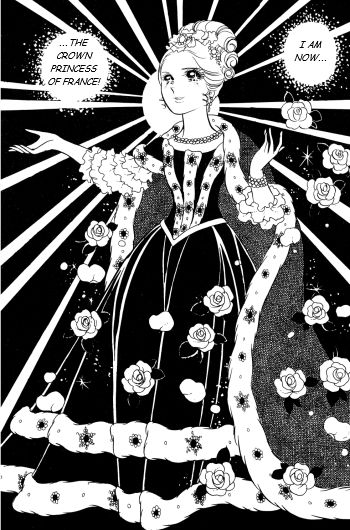 And nothing fits a Crown Princess like an ermine dress and cape, except for bejeweled ermine.

In a nutshell, a dress made with a whole bunch of fancy trimmings, and/or materials, just to make it look pretty.

This has long been Truth in Television, and wearing such a dress in Real Life serves two simultaneous purposes.

In fiction, there are also two simultaneous purposes.

Now the exact form of the dress doesn't matter. It can apply to grand, sweeping gowns, or mini dresses. What matters is the heavy use of fancy materials or decorations (which can be expensive, even today).

Admittedly, there is no real objective line between this and a regular evening dress, so it's more a manner of how obvious it is the dress is pimped out. Say a lady has an evening dress with a fancy design embroidered onto a small part of the skirt. Fancy and stylish, but it's not that obvious, even when you see the skirt. So it wouldn't be this kind of dress. If most or all of the dress was instead almost covered in embroidered designs, it would be this trope.

Sometimes a character with a Clothes Make the Legend dress uses this trope to make her dress fancier, while still keeping its iconic look.

This trope might apply to guy's clothes (as in they aren't crossdressing), but in fiction, this type of outfit is reserved for either known historical uses, based off those uses, or else characters who are outright fops.

This will show up more often when combined with Princesses, especially Princess Classic.

Examples of Pimped-Out Dress include: