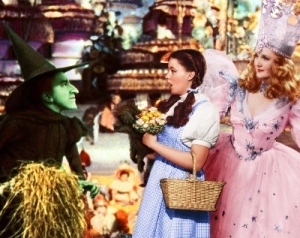 The 1939 Metro Goldwyn Mayer film adaptation of The Wonderful Wizard of Oz starring Judy Garland. To many people, more familiar than the original book, and -- largely thanks to becoming an annual broadcast television staple in The Fifties -- one of the most famous movies ever made.

The film changed the silver shoes to ruby slippers (depending on this source, this was either to show off the new color technology of the time, or because silver shoes didn't show up well), merged the two good witches, cut out several incidents, including all of Dorothy's (admittedly anticlimactic) journey from the Emerald City to Glinda's palace, and added the All Just a Dream ending -- the studio heads thought the audience was too sophisticated to accept a "real" fantasyland.

This movie has proven so popular that it has had several stage adaptations written and produced over the years. Professional productions have included a touring ice show in the 1990s, an All-Star Cast concert staging in New York City in 1995, another N.Y.C. production that ran seasonally at Madison Square Garden later in the decade, and a 2011 London production produced by Andrew Lloyd Webber that added several new songs by Lloyd Webber and Tim Rice. The 2011 Tom and Jerry Direct to Video movie Tom and Jerry and The Wizard of Oz is a Twice-Told Tale version. And in 2013, Disney released Oz the Great and Powerful, a well-made Prequel which, while not legally permitted to actually make references to the 1939 film, still managed to set up almost everything from it. A sequel to Oz The Great and Powerful was approved by Disney on March 2013, but no news has come up since.

In late 2013, a remastered, 3D IMAX version of the film was very briefly released to theatres (it ran only one week) in celebration of its then-upcoming 75th anniversary.

The Stock Parody Off to See the Wizard is almost invariably derived from this version of the story.