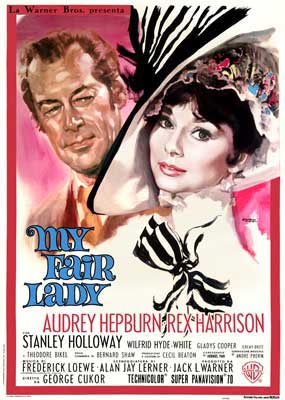 While most people are more familiar with the 1964 Audrey Hepburn film from Warner Bros, My Fair Lady started life as a stage Musical by Alan Jay Lerner and Frederick Loewe, based on George Bernard Shaw's Pygmalion, and starring Julie Andrews and Rex Harrison. It was a smash hit when it opened in 1956, and set new records for the longest run in Broadway musical history (a title now held by The Phantom of the Opera, which is still running).

The musical follows the young Eliza Doolittle, an outspoken and hopeful flower girl in Edwardian England who takes elocution lessons from Professor Henry Higgins, who (as a result of a bet with the kindly Colonel Pickering) promises to turn her into "a lady." He then trains her, day and night, using some downright bizarre machinery and techniques (the marbles make sense, but some of the others...)

When Higgins attempts to try Eliza out on Society by introducing her into his mother's box at Ascot, the transfigured flower girl also encounters young Freddy Eynsford-Hill, who, unaware of Eliza's true social standing, is instantly smitten -- despite Eliza's humiliating lapse into vulgarity at the running of the horserace itself.

The lessons finally culminate in the Embassy Ball, at which ambassadors, lords, and the Queen and Prince of Transylvania will be present. The ball, despite the presence of the venal language expert Zoltan Kaparthy, goes incredibly well; Eliza dances with the prince and many at the ball believe Kaparthy's identification of Eliza as a Hungarian princess(!).

Then the relationship between Eliza and Higgins, which had been steadily improving, takes a huge blow when Higgins takes all the credit for Eliza's success. Eliza is understandably saddened and enraged and she leaves the house after an outburst that leaves Higgins angry and confused; the rest of the play involves them figuring out their relationship in their own way, though if it works out in the end is left to the viewers' interpretations.

The film follows this plot exactly, and was very well received as well, winning 8 Academy Awards. The filming of the movie took place at the time of President Kennedy's assassination; actress Audrey Hepburn made a speech to the cast and crew on the day.

The movie was named to the National Film Registry in 2018.

Tropes used in My Fair Lady include:
Retrieved from "https://allthetropes.org/w/index.php?title=My_Fair_Lady&oldid=1849376"
Categories:
Cookies help us deliver our services. By using our services, you agree to our use of cookies.