A Moment of Peace 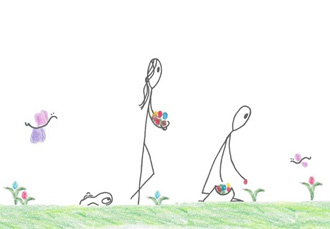 This is the first character.
He is the God of In-Between Places.
He is called Crux by his friends, of which he has two.
He dwells in doorways, crossroads, and airports.
He is present in the crackling air
between the calm and the storm
and in the moment between
a glance and a kiss.
His temples are waiting rooms.

Anyway. What I mean to say is: would you like to have tea with me and George? We're going to wear hats. And pretend to watch soccer.
—Evi

When you fall in love, God breaks out his crayons.
—Abigail

A Moment of Peace, occasionally shortened to aMoP, is a story about two lovers trying to survive in a post-apocalyptic world where rampaging monsters rule the earth and human civilization has been reduced to a collection of nomadic scavengers. Unlike most other fiction that takes place after the end of the world, A Moment of Peace has a gentle, optimistic tone. One of the main premises that the comic keeps coming back to is that the world is flawed, but beautiful.

It's comparable to the Colour My... Series.

Tropes used in A Moment of Peace include:

Clorian: Did you ever pick one?
Evi: No. Wishes are dangerous.