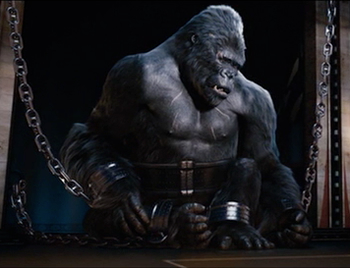 A specific species of Anti-Villain: a creature that could be called monstrous, but can't actually be viewed as evil, since it lacks any actual malice.

This is not to say that they're not a threat; they're usually a literal monster, and if they're not dealt with, many people will die. It's just that, in theory, options besides killing the monster exist.

Sometimes compared to a Complete Monster or a Corrupt Corporate Executive type to make the distinction between "monster" and "evil" more explicit and obvious.[2] Expect early victims to be Assholes for the usual reasons: we don't feel as bad about a giant dick being killed, and it doesn't hurt any sympathy we may have with the monster.

See also Monster Is a Mommy, a Sub-Trope of when the monster in question is fully justified or even doing objective good in its monstrous actions. See also Why Isn't It Attacking? When the non-malicious behavior is noticed.

Examples of Non-Malicious Monster include:

Retrieved from "https://allthetropes.org/w/index.php?title=Non-Malicious_Monster&oldid=1869599"
Categories:
Cookies help us deliver our services. By using our services, you agree to our use of cookies.