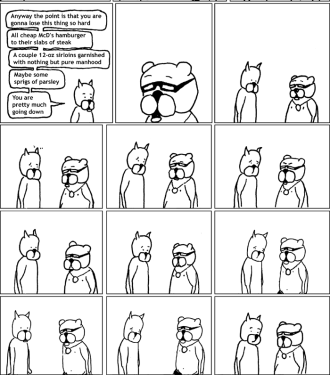 This parody of Achewood by xkcd sets the record for number of awkward-pause panels in one strip (previously held by Achewood).

A silent panel in sequential art. Usually the next-to-last panel in a serialized comic strip, since it approximates the comedic pause before a punchline.

Particularly efficient comic artists may copy and paste adjacent panels, since the point of the Beat Panel is usually that the characters are frozen in contemplation. Another variation is to have two beat panels, with just a quizzical change of expression in the second to show a character's confusion (more likely to happen in a four-panel strip than a three-panel strip). It can also be unusually long to indicate a long beat.

Compare Silent Scenery Panel. A Beat is the (un)spoken version.

Examples of Beat Panel include:

Retrieved from "https://allthetropes.org/w/index.php?title=Beat_Panel&oldid=1964910"
Categories:
Cookies help us deliver our services. By using our services, you agree to our use of cookies.