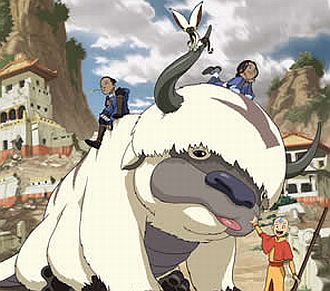 The Gaang has one BIG team pet and one little one.

The default mascot of the party and usually the most outlandish of the bunch. Can be a robot, magic animal, or in a more realistic setting, a little girl much younger than everyone else. Often a Small Annoying Creature.

Most of the time, the Team Pet is comic relief. For obvious reasons their mere presence can ruin a dramatic scene most of the time. More seriously, their motivations for fighting may seem kinda vague, especially when they are Optional Party Members. You wish more of them were. This doesn't stop some of them being a member of the Five-Man Band.

If the Team Pet is an otherworldly being, it may end up as an Amusing Alien. It may also be a Pet Monstrosity.

Team Pets do have their other uses, however. We hear lots of stories of dogs pulling people from burning buildings or otherwise saving their lives, for example. Also, the Team Pet can go get help if its master (or someone else on the team) gets in trouble. And a Team Pet can act as an adorable scene partner for a heartfelt Surrogate Soliloquy. It can be a Sealed Evil in a Teddy Bear if it is Not So Harmless once it's Restraining Bolt is loosened.

Gratuitous Animal Sidekick is a special category of this, often used in an Animated Adaptation of a live-action show. See also Intellectual Animal, Nearly-Normal Animal, Talking Animal, and Timmy in a Well.

Tagalong Kid is the human equivalent to this, Robot Buddy the artificial version.

Examples of Team Pet include:

Retrieved from "https://allthetropes.org/w/index.php?title=Team_Pet&oldid=1899102"
Categories:
Cookies help us deliver our services. By using our services, you agree to our use of cookies.