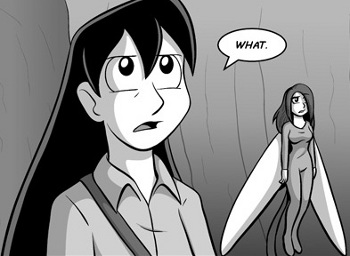 A Stock Phrase when it comes to reactions, but a simple one. Although it is just one word, the way in which it is pronounced can speak volumes about how absurd (or mundane) the situation can be, simply by how and where the inflection in a speaker's voice (if any) is used. In written speech, it's supplemented by the punctuation following it. For example:

None of the above are examples of this trope. That's below.

And that's exactly how it's written, too: "what" with a period at the end. Some people cut this down even farther, going with "wha", "wat", "wut?" or similar. Sometimes appears on forums and image boards as the memes "what is this i don't even" and "i am 12 and what is this" (no punctuation whatsoever and the i not capitalized) and the immortal LOL WUT (all caps, spelling of the second word, and no punctuation whatsoever)-- more complex, but still indicating that the speaker is too gobsmacked to be capable of a coherent sentence.

IMPORTANT TO NOTE: "What", in this context, is an interjection. Sentences consisting only of an interjection require an exclamation point. Interjections need to end with either an exclamation point or a comma (a dash or ellipse would also work), and (obviously) you can't end a sentence with a comma. "What!" is grammatical, as is "What?" (an interrogative), but "What." is not. However, "What." is how this trope is written, and "What." is how it shall remain. Just because it's not grammatical, doesn't mean it's not expressive. Dialogue is not required to be grammatically correct.

Unless it is being listed as a trope, DO NOT Pothole this trope on other pages.

Examples of Flat What include:

Retrieved from "https://allthetropes.org/w/index.php?title=Flat_What&oldid=1949805"
Categories:
Cookies help us deliver our services. By using our services, you agree to our use of cookies.