Everything About Fiction You Never Wanted to Know.
(Redirected from Nintendo 64)
Jump to navigation Jump to search 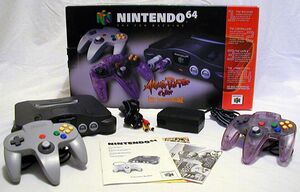 Get N or Get Out!
Change the System!
"Nintendo Sixty-FOUUUUURRR!!! OH MY GOD!"

Nintendo didn't drag their feet with the system this time, and released the Nintendo 64 to compete with the struggling Sega Saturn and the newbie PlayStation.

The N64 was a big hit in its early life, but it lost many key franchises because of Nintendo's reluctance to use CDs after the fiasco with Sony and Phillips on the CD add-on for the SNES (as well as Nintendo's general ham-handedness regarding third parties during the SNES period). One of these franchises was Final Fantasy, as Squaresoft (now Square Enix) took Final Fantasy VII to the PlayStation—which offered more storage space and less censorship for games—and watched it become the system's Killer App. Nintendo never recovered from the lack of third-party support, and it relied on Rare to help define the system. The N64 also began Nintendo's focus on local multiplayer party games.

Nintendo's adherence to bulky, expensive cartridges instead of the far-cheaper-to-produce CD-ROM format appears to have been in part to be a fear of piracy (Nintendo's early experiment with floppy disks, the Famicom Disk System, resulted in rampant piracy). The company's fear hurt everyone else: not only did multi-platform developers have to chop out features and add fogging so a game would fit on an N64 cartridge (as well as map controls to the system's unique controller), but the consumer typically paid at least $10 more than Saturn, Playstation, and Dreamcast titles.
|=| Addons=