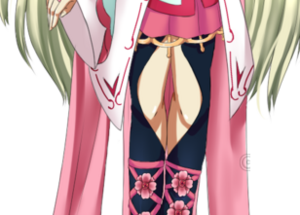 Can you see the problem? Because the artist sure as hell can't.

Believe it or not, not everyone is trying to get crap past the radar. Sometimes, a cigar is just a cigar, there's only a single entendre, and what was meant to be innocent is portrayed completely sincerely.

That doesn't stop the infantile among us from occasionally finding things to snicker about.

They were trying so hard. Haha, "hard". It was obvious that nothing dirty was intended, not even in the "wink wink, nudge nudge" sense. And yet... thanks to poor word choice, unusual inflection, bad object placement or some other factor, what was obviously meant to be taken at face value takes on some sexual Subtext. Suddenly, an innocent comment about cute little kittens sounds like something out of bad lesbian erotica. It clearly wasn't intentional, but it can cause a viewer to stop in his or her tracks, trying to stem the giggles. It can sometimes be hard to tell if you're dealing with this trope or a case of Getting Crap Past the Radar, especially if you're dealing with a Stealth Parody.

The reason for this phenomenon is, of course, the fact that Freud Was Right. Ho Yay happens when this phenomenon overtakes an entire relationship. Contrast Innocent Innuendo, when this is purposefully invoked, Accidental Pun and That Came Out Wrong, if the characters also catch the dirty meaning and the victim scrambles to explain himself. See also Have a Gay Old Time, when this happens due to changes in word use.

Verbal variations of this tend to be followed up with That's What She Said.

Examples of Accidental Innuendo include:

Retrieved from "https://allthetropes.org/w/index.php?title=Accidental_Innuendo&oldid=1898368"
Categories:
Cookies help us deliver our services. By using our services, you agree to our use of cookies.