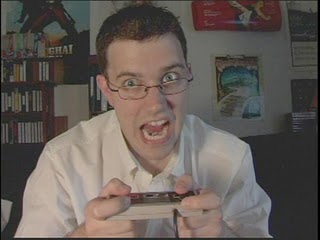 James Rolfe is the Angry Video Game Nerd, formerly Angry Nintendo Nerd before he stopped focusing on just the NES (and realized he couldn't sell T-shirts with someone else's trademark on them), a misanthropic, foul-mouthed, chronically ill-tempered gaming geek with a predilection for Rolling Rock beer who plays weird, old, and, more often than not, Nintendo Hard games, some of them with the worst Fake Difficulty imaginable. We're talking truly terrible here. Epic Snark Bait. "The Nerd" holds a specific torch of hate towards licensed games, especially ones published by LJN Toys, which he sees as manipulating hopeful and oblivious kids into buying complete trash.

The Nintendo Entertainment System was a landmark in the history of video gaming - it was the first Japanese console to make a splash in the US, the first console released after The Great Video Game Crash of 1983, and the first console that most members of Generation Y have firsthand memories of playing. During its lifespan of nearly a decade, the console introduced now-classic characters like Mario, Link, and Mega Man, saw video games shift from thinly veiled excuses to kill bad guys to complex plots, and produced scores of truly great games, some of which remain classics to this day.

But it also produced some real stinkers, and that's where the Angry Video Game Nerd comes in.

His reviews inevitably spiral downward into a barely-coherent rant peppered liberally with Cluster F-Bombs and scatological references culminating in a violent frothing rage that puts the Incredible Hulk to shame. The Nerd gets frequent unwanted visits from the stars of the games he plays, from Bugs Bunny to Freddy Krueger.

Note, however, that a handful of episodes are not so much about a single shitty game as they are about a certain console or accessory (there are even a few that aren't about video games at all). Aside from giving reviews, the Nerd has also given a bit of video game history, such as a summary of the infamous Console Wars.

When he isn't getting his nerd on, James Rolfe maintains a website at Cinemassacre.com where he showcases various other ventures, including his own independent films and an annual "Monster Madness" feature each October counting down to Halloween.

The AVGN had a long and violent "rivalry" with The Nostalgia Critic that came to a head with a Battle Royale With Cheese in October 2008, and another in May 2009, this time a Massive Multiplayer Crossover with his guitar guy in the fray. See the Critic's page for more details (and TGWTG Year One Brawl for said crossover). In Real Life, Rolfe and Doug Walker (The Nostalgia Critic) are good friends and Rolfe has even guested in several other That Guy With The Glasses projects, including Cameos in both of the site's subsequent anniversary specials.

He produced an Angry Video Game Nerd Movie, which can be viewed on-demand here.

Tropes used in The Angry Video Game Nerd include:

Retrieved from "https://allthetropes.org/w/index.php?title=The_Angry_Video_Game_Nerd&oldid=1949359"
Categories:
Cookies help us deliver our services. By using our services, you agree to our use of cookies.