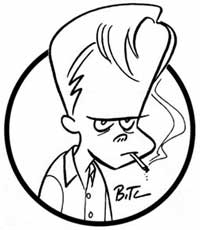 Bruce Walter Timm (born on February 8, 1961) is an American character designer, animator and television producer. He is also a writer and artist working in comics, and is known for originating the Timm Style of animation as well as being one of the five people generally recognized as the team responsible for the DC Animated Universe(the other four being producer-art director Eric Radomski, writer-producer Alan Burnett, writer Paul Dini, and casting director Andrea Romano).

Timm landed his first animation job in 1981 with Filmation Studios as a layout artist for Blackstar. In 1982, he joined Don Bluth Productions as an assistant animator for the feature film The Secret of NIMH. He then returned to Filmation to work on He-Man and the Masters of the Universe. In 1984, Timm joined Marvel Productions doing character and prop designs for G.I. Joe. From there he went back to Filmation and worked on She Ra Princess of Power. In 1987, Timm worked for Ralph Bakshi Productions as a character designer on The New Adventures of Mighty Mouse, and also worked on Spiral Zone. In 1988, he worked for DiC Entertainment on The Beany and Cecil Show, which gave him his first shot at directing.

In 1989, Timm joined Warner Bros to be a storyboard artist and character designer for Tiny Toon Adventures. In a remarkable stroke of good luck, it was on this assignment that he first met Radomski, Dini and Romano, forging a creative team that would end up lasting the better part of twenty years. Shortly before Tiny Toons was cancelled, Warner decided to try producing an animated Batman series to capitalize on the popularity of Tim Burton's reboot of the franchise. Timm and Radomski both made it known they were interested, with Timm doing some designs for Batman in the style of the Superman Theatrical Cartoons shorts from the 1940s, and were then made co-producers, with Timm handling the character designs and Radomski tackling the art direction. Batman the Animated Series premiered in September 1992, and eighty-five episodes were produced and aired by FOX on weekday afternoons. He went on to co-create and produce Superman: The Animated Series (premiered in September 1996), The New Batman Adventures (premiered in September 1997), and Batman Beyond (1999-2002) for The WB network. Timm also served as producer on the feature-length straight-to-DVD Batman Beyond: Return of the Joker before taking the helm as creator and producer of the critically and fan-acclaimed Justice League, which debuted in November 2001 on the Cartoon Network. It ran for two seasons before being revamped into Justice League Unlimited, which ran for three more. Unlimited would be the final DCAU series in terms of both continuity and style. Timm continues to be producer on many DC based straight-to-DVD animated projects like Superman: Doomsday and Justice League New Frontier.

Timm's work is easily known by its distinctive art style, first seen on Batman The Animated Series. Heavily influenced by his love of Golden Age comics and 1940s art deco design, Timm's characters usually have rather angular facial structure and simplistic hairstyles. His male characters tend to the "lantern-jawed and brawny" side, while his female characters are noted for having realistic proportions(at least, realistic as far as comic book characters) that lean more toward normal.

Retrieved from "https://allthetropes.org/w/index.php?title=Bruce_Timm&oldid=1498357"
Categories:
Cookies help us deliver our services. By using our services, you agree to our use of cookies.