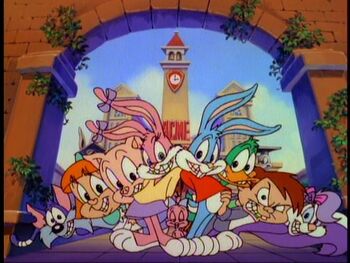 A revival of sorts for the Looney Tunes style of comedy, using teenage Toons highly reminiscent of several classic characters. But rather than pure rip-offs, they were actually being taught in school by the originals on being funny and the finer parts of Cartoon Physics and being a Toon. This continues the proud tradition of Warner Brothers Animation having a heavy dose of meta-humor, shtick and Lampshade Hanging of many cartoon tropes, but this also incorporated themes of teen adolescence, Aesops, and nineties sensibilities. It was executive produced by Steven Spielberg, who, along with fellow executive Tom Ruegger, thought the Looney Tunes style was due for a make-over on television after the success of Who Framed Roger Rabbit?. TTA started the Silver Age of Warner Brothers cartoons, resulting in similar shows that shared many of the same tropes and were produced in much the same way (writing, storyboards, key animation and voice work done in the US, inbetweening done by Asian studios (TMS excluded; preferring to do most of their own work themselves, albeit with an uncredited staff), Steven Spielberg as executive producer). It was also one of the first shows to contribute to the '90s animation boom, following The Simpsons by less than a year.

TTA premiered in syndication in the fall of 1990. Many of the stations that ran it were FOX affiliates, leading to Fox officially adding it to the afternoon lineup for its last season (1992-1993). After it left the Fox Kids lineup in 1995, it's since been shown in reruns on Nickelodeon, Kids WB, Cartoon Network, and the Nicktoons Network.

Episodes were either broken into three 7-minute shorts, or made into half-hour full-episode adventures. Similarly, these would be split among stories dealing with misadventures in school, Looney Tunes-like shorts out in Acme Acres, or the occasional music video. (The show's renditions of They Might Be Giants' "Istanbul (Not Constantinople)" and "Particle Man", for example, are favorites amongst fans of both the show and the band to this day.)

A feature length direct-to-video movie, Tiny Toon Adventures How I Spent My Vacation, shows the misadventures of the kids on various summer road trips. (It was eventually split up into four parts and worked into the show's syndicated run.)

The show was a precursor to - and the inspiration for - Animaniacs; they were both produced by the same staff and shared many of the same writers. The main difference is that Tiny Toons generally had all the characters interacting with each other, while Animaniacs focused mostly on individual characters or groups for their Three Shorts.

Fun fact: Tokyo Movie Shinsha (now TMS Entertainment, Ltd.), which made the intro and several episodes (including the direct-to-video Tiny Toon Adventures How I Spent My Vacation) also animated Lupin III, Devilman Lady, a Golgo 13 film, and the original version of Aim for The Ace!. The first season is now available on iTunes, broken up into volumes. Here it is.

The show has been reaired in Russia since 2010, and "It's a Wonderful Tiny Toons Christmas Special" was reaired in the UK last month[when?], but doesn't appear to be reairing in America or the rest of Europe, unless Nick is willing to get back the rights for The 90s Are All That or The Hub gets the rights.

Tropes used in Tiny Toon Adventures include:
Retrieved from "https://allthetropes.org/w/index.php?title=Tiny_Toon_Adventures&oldid=1931820"
Categories:
Cookies help us deliver our services. By using our services, you agree to our use of cookies.