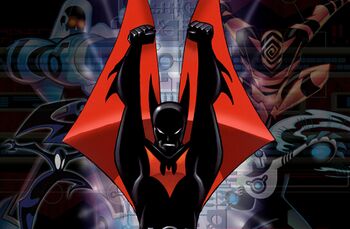 The new Batman and his rogues (clockwise from bottom left): Inque, a rejuvenated Mister Freeze, Spellbinder, and Shriek.

Batman Beyond, an animated series which aired from 1999 to 2001, was produced by the same powerhouse team that started Batman: The Animated Series and Superman: The Animated Series. This Action Series follows the adventures of teenager Terry McGinnis, in a story set about forty-some years in the future, where he accidentally discovers that the eccentric aged billionaire Bruce Wayne is, in fact, the legendary retired hero Batman. Also goes by the title Batman Of The Future in Europe, Japan, South America, New Zealand and Australia.

Having some personal reasons to dole out justice himself, Terry pressures Bruce to allow him to take up the mantle of the legendary crime-fighter. Initially reluctant, Bruce eventually accepts Terry because his father was killed while uncovering corrupt dealings in what was once Wayne Enterprises, now merged into Wayne-Powers Enterprises after a hostile takeover by Derek Powers several years ago. Sharing a similar thirst for justice with the original Batman and armed with an advanced combat suit, Terry works to make criminals afraid of the Batman once more while Bruce acts as Mission Control and his mentor, directly coaching Terry from the Batcave on most of his adventures.

The Gotham city of the mid-twenty-first century is an archetypal Cyberpunk setting, though some Noir remnants from the original series show up occasionally. It is still dirty, crowded and corrupt, only now the cars can fly. Wayne-Powers Enterprises does not have the philanthropic ideals that existed with Wayne heading the company, and Derek Powers is unhappy with the interference caused by this new Batman. His transformation into the radioactive supervillain Blight because of Batman only makes the hatred more personal.

The creators were deliberate in not trying to re-hash all of the old villains, trying instead to give the show its own Rogues Gallery. However, elements of the old Bat-Mythos are used in new ways; a street gang called "The Jokerz" borrows the sick imagery of the most famous Bat-villain and the series even has a Commissioner Gordon: Barbara Gordon, a.k.a. Batgirl. She is into her 60s and, unlike her father, is extremely opposed to this new Batman, seemingly embittered by a past falling-out with Bruce.

This series follows the structure of a Revival. However, Batman: The Animated Series and Superman: The Animated Series were still in production when Batman Beyond was first pitched and developed, so there was no "end" before this show began. The actual impetus was a meddling executive requesting a Batman-in-high-school series that could be marketed to the Buffy audience. Because of this, it is not without its flaws; many new villains had generic motives and lacked the psychological edge of the classic Batman. But the show's best episodes sit right alongside the best of the other DCAU series. The strength in this series is in Bruce being a father figure to Terry, while Terry comes full circle as his own man and his own Batman, who even ends up surprising the old and jaded Mr Wayne.

A well-loved two-part episode brought in Superman and the futuristic Justice League, which proved so popular that it helped sell the series of the same name, which effectively replaced this series in 2001. Batman Beyond did not have a proper Grand Finale, simply ending production at the conclusion of its third season, but it did produce a feature-length special and eventually received a proper conclusion in the Justice League Unlimited episode "Epilogue."

Kevin Conroy of Batman: The Animated Series reprises his role as Bruce Wayne, while Terry is voiced by Will Friedle. There was a direct to DVD feature called Return of the Joker, with Mark Hamill returning as the Ace of Knaves himself, that helped bridge the gap between end of the "present" DCAU in Justice League and the future of Batman Beyond, including Batman's final fight with the Joker, and providing a deeper reason for just why he eventually gave up being Batman.

Interest in the series has evidently picked up dramatically of late;[when?] a special edition DVD collection has been released and the show is currently airing on The Hub network.

While it had its own spin-off comic book for a while in the late 90s, DC recently[when?] has published a mini-series based on the show; and now is publishing a new ongoing comic series. For the tropes featured in the current comic book adaptation, see Batman Beyond.

Tropes used in Batman Beyond include:

Retrieved from "https://allthetropes.org/w/index.php?title=Batman_Beyond&oldid=1842575"
Categories:
Cookies help us deliver our services. By using our services, you agree to our use of cookies.