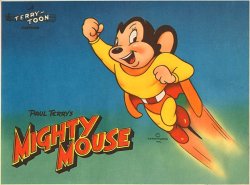 Here I come to save the day!

A Superhero anthropomorphic mouse saves the day, the world and his girlfriend, Pearl Pureheart. Originally one of the Terry Toons (yes, from the same fine company as Heckle and Jeckle) from The Golden Age of Animation.

Remade by Filmation for television in the 1970's in a show starring Mighty Mouse and fellow Terrytoon characters Heckle and Jeckle in a show called The New Adventures of Mighty Mouse and Heckle & Jeckle. This version lasted until the early 1980's and even spawned the movie Mighty Mouse and the Great Space Chase in 1982 (which was originally shown on the TV series in sixteen serialized chapters).

The series was remade again in the late 1980's for CBS' Saturday morning cartoon block by famed animator Ralph Bakshi. His Mighty Mouse: The New Adventures was a highly innovative, completely batshit insane, Too Good to Last series that pioneered the anarchic pop-culture obsessed, young adult-attracting style of television cartoons which flourished in the 1990's. Many of those who worked, created or had major impact on those later shows originally found writing and animation jobs for Mighty Mouse: The New Adventures including Bakshi's long time friend and prostege John Kricfalusi, Bruce Timm, Jim Reardon and Tom Minton. Sadly, if remembered at all, it's usually for the controversy surrounding a scene in which Mighty Mouse sniffed some crushed flowers that looked a heck of a lot like cocaine. The creators contend to this day that it was unintentional, but considering how every episode seemed ever more dedicated to Getting Crap Past the Radar, there really isn't a whole lot of plausible deniability.

Tropes used in Mighty Mouse include:
Mighty Mouse: The New Adventures provides examples of:
Retrieved from "https://allthetropes.org/w/index.php?title=Mighty_Mouse&oldid=1830522"
Categories:
Cookies help us deliver our services. By using our services, you agree to our use of cookies.