Everything About Fiction You Never Wanted to Know.
Jump to navigation Jump to search
/wiki/Ralph Bakshicreator 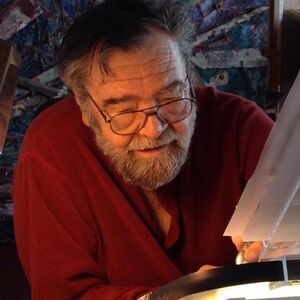 Ralph Bakshi is one of animation's greatest unsung heroes.

Bakshi was born in Haifa (then part of the British mandate of Palestine) in 1937. When he was one year old, he traveled with his family to America and settled in Brownsville, New York, the seedy lower-income community that became the inspiration for the dark and gritty urban setting of many of his cartoons. World War II was about to break out; in fact, when traveling past the Mediterranean, the ship on which the Bakshis were sailing was boarded by Nazi troopers, but the ship's American affiliations prevented the incident from becoming hostile.

Bakshi became interested in cartooning when he encountered a book titled The Complete Guide to Cartooning by Gene Byrnes in the Brownsville public library (which he promptly stole), circa 1952. Despite being a poor student and disliked by his teachers, who considered him a talentless punk, Ralph was one of only 10 students of art who passed a drawing exam to enter Manhattan's School of Industrial Arts.

He got his start working for famed golden-age American cartoonist Paul Terry, a man who regarded cartoons as all business and no art. Bakshi's inventiveness, disregard for the rules, and all-around moxie eventually earned him a certain degree of prestige. He created the obscure comic strips Bonefoot & Fudge and Junktown, and launched some larger-scale animation projects like his animated film Wizards and The Mighty Heroes, which he pitched on the spot to CBS execs, making up the show as he went along.

Nowadays, Ralph Bakshi may be best remembered for his work on a film adaptation of Robert Crumb's risqué underground comic strip Fritz The Cat, which became the first American cartoon to be rated X by the MPAA, much to Bakshi's chagrin. He worked for the 1980s revival of the classic "Superman meets Mickey Mouse" cartoon, Mighty Mouse, which was later canned for getting too much crap past the radar. It was eventually pulled off due to a scene where Mighty Mouse sniffed a flower that was reminiscent of cocaine consumption, but it was extremely influential on pretty much every animated series that followed it over the next decade.

Bakshi's filmography certainly does not stop there; he is also the creative mind behind such underground cartoon milestones as the animated version of The Lord of the Rings, the Cult Classic Fire and Ice, Heavy Traffic (a gritty, darkly humorous modern-day fable about urban violence), Coonskin (his highly controversial reimagining of the tales of Uncle Remus, considered racist by many due largely to its "blackface" character designs, although the film is supportive of the black community and approved by the NAACP) and Cool World, a film he envisioned as the first animated horror film, but was radically changed by Paramount Pictures without Bakshi's consent and wound up as a subpar imitation of Who Framed Roger Rabbit.

Also worth noting is that Bakshi also produced and directed Rocket Robin Hood and the second and third seasons of the 1960s Spider-Man cartoon. The latter varied between in quality under Bakshi's tenure, although a lot of this was due to Executive Meddling. The suits continually cut both Bakshi's budget and his lead times, forcing him to continually reuse stock footage in the same way that Filmation later would. By the end, Bakshi was reduced to literally stitching together new episodes entirely out of stock footage.

The book Unfiltered: The Complete Ralph Bakshi provides much information on the life, influences and work of this sadly underrated animation maverick. His final work, The Last Days of Coney Island, funded on Kickstarter, was released in 2015 after being in Development Hell for decades.

Some recurring characteristics of Ralph Bakshi's work:
Retrieved from "https://allthetropes.org/w/index.php?title=Ralph_Bakshi&oldid=1364675"
Categories:
Cookies help us deliver our services. By using our services, you agree to our use of cookies.