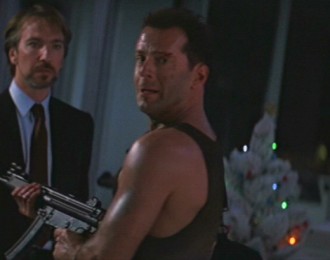 A landmark action movie franchise that started with the greatest Christmas movie ever made in 1988 when the world was introduced to Badass John McClane. He is usually called "the right man in the wrong place at the wrong time." The series is composed of five movies with a sixth one stuck in development hell, and supposedly cancelled (as of 2021).

Bruce Willis stars as New York cop John McClane, who usually has to employ his skills in a situation that has since been called Die Hard on an X: he is usually trapped inside a location and has to climb around in air ducts and counter the bad guys' plot. The setup is slightly different in each film (mostly depending on the location), but he always finds himself in the way of terrorists hatching some sort of plot.

The first film arguably started the trend of modern action movies that had intelligent, well-acted villains with intricate, meticulously-planned schemes, instead of the usual paper-thin plot layered with extra helpings of dakka to keep you from caring. It also helped to codify the modern action hero (after Indiana Jones) where they are prone to sweat, bleed, snark and make things up as they go along while you feel they truly are in deadly danger. It was named to the National Film Registry in 2017.

If you came here expecting the trope Die Hard on an X from a link, go there instead and please change the link to it, and tell the troper who inserted that link that he/she is a silly goose.

Also a recent[when?] mini-series of comics that showcase John's early days in the force.

Now it has a character sheet. Ho ho ho.

These films provide examples of:
Retrieved from "https://allthetropes.org/w/index.php?title=Die_Hard&oldid=1965655"
Categories:
Cookies help us deliver our services. By using our services, you agree to our use of cookies.