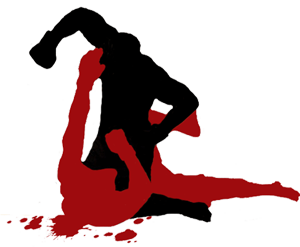 Put away the magic, energy blasts, and witty banter. Beauty Is Never Tarnished, Made of Iron, Toon Physics, and Hollywood Healing, if they were present in the story before, are all temporarily turned off. This is the scene where a villain (or very dark antihero) pummels, punches, kicks, beats, and/or batters someone into a limp, bruised, bloody pulp. Note that as far as Fight Scenes go, this is quite one-sided. That Heroic Second Wind you're waiting for? Keep waiting. It doesn't end that way.

When the victim can no longer even try to strike back, or if he never even had a chance to, the attacker just keeps going. It takes all the victim's Heroic Resolve just to keep breathing. And sometimes, even that may not be enough—some attackers take this to its logical conclusion and beat the victim to death in a scene that often qualifies as both Nightmare Fuel and crossing the Moral Event Horizon.

Dialogue is limited. At most, a particularly cold attacker may continue to mock or insult the victim between blows. Some blows are delivered off-screen; sounds are sometimes more disturbing than visuals, anyway.

In the West at least, 99.9% of the time, this happens between males for obvious reasons. And, no, it doesn't always have to be villain-beats-up-hero, but most of the time, it is... we hope (unless the villain really deserves it.)

Appropriate Viewer Stock Phrases are "I can't believe I'm watching this," and "I'm going to be sick."

If both combatants hand out a brutal beating, it's How Much More Can He Take?. If the beatdown is in retaliation for a past injustice but still makes you think "too far?", then it's Extreme Melee Revenge. If the victim is trying desperately to get away, the attacker may need to inform him or her that You Will Not Evade Me.

Contrast with the Curb Stomp Battle and Once Is Not Enough. Compare Unstoppable Rage (one of the causes) and Cold-Blooded Torture.

Examples of No-Holds-Barred Beatdown include:

Retrieved from "https://allthetropes.org/w/index.php?title=No-Holds-Barred_Beatdown&oldid=1840242"
Categories:
Cookies help us deliver our services. By using our services, you agree to our use of cookies.