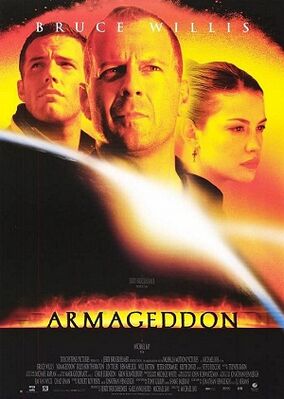 The plot: a peaceful summer afternoon in New York City is disturbed by meteorites falling, destroying all the recognizable buildings and killing a bunch of characters we're not supposed to care about. NASA reveals they're the pebbles before the boulder -- a meteor the size of Texas is going to hit Earth, and nothing, not even bacteria, will survive. The big brains at NASA have come up with a plan to save the world, but it takes experts to pull it off!

Or does it? Apparently, although NASA has yoinked the patents on drilling machines, even their rocket scientists couldn't put them together or operate them right. So NASA had to call in its creator -- Harry Stamper, the oil rig operator. Harry brings his daughter Grace with him, because he disapproves of her romance with rebellious hotshot A.J., whom Harry fired for having "hunches". On hearing what's at stake, Harry agrees to go up and do the job himself, but not without his own team. NASA has to seek out Harry's gang of lawbreaking ne'er-do-wells and get them trained in two weeks to go up to drill the meteor and break it into two pieces that will miss the Earth, or everyone dies.

If you want "Armageddon" in the Biblical way, see The End of the World as We Know It. If you wanted the Web Original story "Armageddon???", see The Salvation War.

Tropes used in Armageddon include:
Retrieved from "https://allthetropes.org/w/index.php?title=Armageddon&oldid=1767350"
Categories: