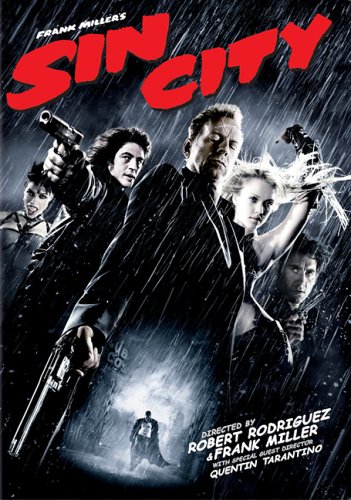 Probably writer/artist Frank Miller's best known work (other than The Dark Knight Returns), Sin City is an irregular comic book series about the venal Basin City and the seedy inhabitants who lurk in its alleys and doorways. Infamous for its absurdly macho writing, Sin City reads like an Affectionate Parody of Film Noir turned Up to Eleven: every hero is a mentally or physically scarred bruiser and every woman is a beautiful dame with a heaving bosom. Black and Gray Morality is predominant.

The series's other defining attribute is its artwork, which is largely black and white, with occasional spot colouring for certain important characters. Miller plays heavily with silhouettes, high-contrast images and negative space to create a series of visually striking images that look like no other comic on the market.

Because it is almost exclusively set in and around Basin City's criminal underworld, Sin City has a number of recurring characters, although the protagonists vary from story to story. Additionally, some plotlines overlap or weave together in subtle ways (The Hard Goodbye and A Dame to Kill For are both mostly set on the same night, with the protagonists driving past one another in a single scene in both comics).

The currently available collected editions are, in order:

1: The Hard Goodbye - Originally just titled Sin City until the film adaptation, this story follows Marv, a street thug prone to psychotic episodes, who falls in love with a beautiful prostitute one night, only to find her dead the following morning and the cops beating down his door to take him in for her murder. On his quest for vengeance, Marv shakes down the criminal underworld, does battle with corrupt cops and discovers a sick conspiracy.

2: A Dame to Kill For - Dwight McCarthy, a freelance photographer with a vicious temper, is pissed off when his beautiful ex -- Ava, the dame of the title -- contacts him out of the blue. But his anger is allayed when he discovers that her life has been threatened. With time running out, Dwight must save Ava from her cruel husband and his bizarre manservant. But is Ava what she appears to be, or is Dwight being manipulated into making the biggest mistake of his life?

3: The Big Fat Kill - Dwight gets into more trouble when his new girlfriend, Shelly, is harassed by her abusive ex-boyfriend, Jackie-Boy. Dwight chases after him, but can only watch as Jackie and his pals are killed by prostitutes for threatening to rape one of their number. Ordinarily this wouldn't be a problem -- the prostitutes of Old Town are given free rein by the police -- but Jackie has a dangerous secret, one that might tear Sin City apart.

4: That Yellow Bastard - John Hartigan may well be Sin City's last decent cop, but not for long: It's his last day on the job. But Hartigan's refusing to go quietly, especially since a well-connected young serial killer/rapist has just kidnapped little Nancy Callahan. It's no big thing -- Hartigan's spent his entire life taking down scum like him. But this time, there will be repercussions...

5: Family Values - While picking up some intel for his new new girlfriend, Dwight learns of a mafia war that's about to go down in Sin City. Captured by one side of the impending war, Dwight has to rely on a certain enemy-turned ally for help: the deadly ninja Miho.

6: Booze, Broads and Bullets - A collection of short stories from various sources, including back-up strips from the early issues of The Big Fat Kill and stories from the various Sin City one-shot specials.

7: Hell and Back (A Sin City Love Story) - Wallace is an interesting guy: an artist, a war hero, a short order cook and a lightning-quick fighter. His life is pretty dull, though, until he saves a suicidal woman named Esther and they begin a tentative relationship. In typical Sin City style, however, Esther is kidnapped and Wallace must pull the city -- and the lives of some of its most privileged men -- apart to get her back.

Films - Sin City was turned into an anthology film by director Robert Rodriguez, who quit the director's guild to let Frank Miller take co-director status. Rodriguez shot the film pretty much panel-for-panel from the comics, using black and white footage and Green Screen backgrounds to get the perfect Sin City feel.

The Sin City film comprised The Hard Goodbye, The Big Fat Kill and That Yellow Bastard and was bookended by an adaptation of "The Customer is Always Right", a short story featured in the Booze, Broads and Bullets collection.

Two more Sin City films are planned. One of them will include the story A Dame to Kill For, along with a brand-new sequel to That Yellow Bastard. They were originally scheduled for a 2008 release, but appear to have slipped into Development Hell.

Until now, where it's been Saved From Development Hell.

Not to be confused with SimCity, which is potentially a whole lot nicer. Or GTA Vice City, which is definitely not all that nicer.

Tropes used in Sin City include: