Everything About Fiction You Never Wanted to Know.
Jump to navigation Jump to search
/wiki/Carl Barkscreator 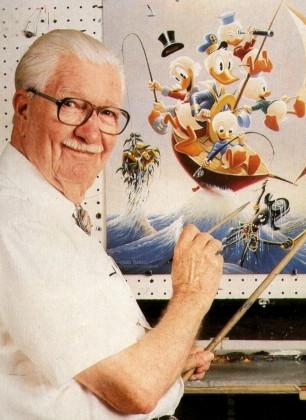 Carl Barks (1901-2000) was a Disney writer and artist who made comics set in the Donald Duck comicverse from 1942 to 1966. He was known as the Good Duck Artist by the readers for much of this time due to a Disney company rule which forbade the comic authors' names from being featured in their magazines.

Barks is renowned for creating characters such as Scrooge McDuck, Gladstone Gander, Gyro Gearloose, the Beagle Boys, Flinthart Glomgold, Magica De Spell, and many others, as well as setting in stone the base geography of the city of Duckburg. His stories brought in the treasure hunt plot to Duck comics and inspired a generation of people (such as George Lucas, Steven Spielberg, Osamu Tezuka, Don Rosa and the writers of DuckTales (1987)) to replicate the thrill of adventure. He's also responsible for expanding Donald Duck's personality beyond his usual one-note characterization in the Classic Disney Shorts; reaching levels that were never rivaled in the animated appearances of the character.

After retiring, Barks took up painting (as seen in the page image). First his paintings were unrelated to his comic career, but later he began recreating scenes from Duck stories in paint. One completely original scene led to him writing one more story in retirement, which was drawn by William Van Horn, a younger Duck artist.

Barks' successor is Don Rosa, who received full power over the canon after Barks' retirement and wrote incredibly well-loved tie-ins to the classic stories.

If you've been interested in reading his stories, there's good news for you:Fantagraphics books is going to republish all of his old Donald Duck stories over a 30 volume series of books in the upcoming years, starting with two volumes soon!

Not to be confused with Karl Marx.

Carl Barks provides examples of the following tropes:
Retrieved from "https://allthetropes.org/w/index.php?title=Carl_Barks&oldid=1584642"
Categories:
Cookies help us deliver our services. By using our services, you agree to our use of cookies.