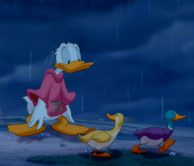 "But if the animals go in two by two, doesn't that mean I'm the duck?"

Simply put, the kinds of brain-farts that can happen when you have two characters on different ends of the Sliding Scale of Anthropomorphism on screen at the same time.

In many cartoon or comic settings one will often find that the characters are anthropomorphic (human-like) animals. The audience tends to accept this without question—until non-humanlike animals appear in the same continuity. Fortunately the audience doesn't usually have a big problem with this.

Things get unquestionably weird when non-humanlike specimens of the same species of animals the main characters are based upon are shown existing in the setting alongside them.

Some Furry Fiction Hand Waves this by explaining that their very humanoid characters have a science-fiction basis. They may be mutants or visiting aliens or something. Perhaps they are normal animals who evolved into a humanlike form after gaining intelligence, along the lines of the Man with the Yellow Hat being a distant cousin to chimps resembling Curious George. This explanation is generally fine as long as there are actual humans forming the rest of the cast. If there aren't any humans around—or if there's no explanation given at all—expect the wave of unsettling implications to hit you soon. The sight of a talking dog-man owning a pet dog (or of a chicken-man eating fried chicken) is pretty strange.

Very often crosses over with Carnivore Confusion, Furry Denial, and occasionally with What Measure Is a Non-Cute? and No Cartoon Fish. See also Anthropomorphic Shift and Feather Fingers. See Animal Gender Bender and Ass in a Lion Skin for a whole new level of confusion. Very often happens because Most Writers Are Human and Furries Are Easier to Draw.

Examples of Furry Confusion include:

Retrieved from "https://allthetropes.org/w/index.php?title=Furry_Confusion&oldid=1893735"
Categories:
Cookies help us deliver our services. By using our services, you agree to our use of cookies.