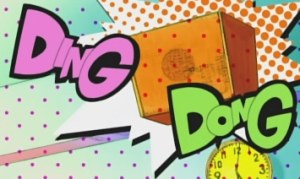 We've all experienced it: We're reading a book, or a comic, or a website, when all of a sudden:

You get hit by an Onomatopoeia.

Sound effects written out as onomatopoeia can be used in many media, but they play a special role in Sequential Art. Comics are highly visual media that show a scene in pictures instead of describing it in words. Without written sound effects, those scenes would live in a peculiarly silent space in the reader's head, where the only imagined sounds would be the dialogue, if any.

Some very creative things can be done with fonts, sizes, colors, shadows or glow, placement, spatial orientations, and curvatures to make a Written Sound Effect more evocative and fit it with the art.

The Written Roar is one specific kind of Written Sound Effect. Contrast the Unsound Effect, which is a written effect that is not onomatopoeia. A particularly common form of Editorial Synaesthesia. Can be used for Sound Effect Bleep with Speech Bubbles Interruption.

Examples of Written Sound Effect include:

Retrieved from "https://allthetropes.org/w/index.php?title=Written_Sound_Effect&oldid=1886763"
Categories:
Cookies help us deliver our services. By using our services, you agree to our use of cookies.