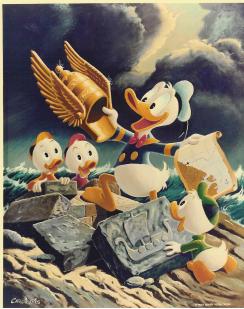 The Ensemble Darkhorse of the Classic Disney Shorts, Donald Fauntleroy Duck is one of history's most famous cartoon characters.

Donald first appeared in the Silly Symphonies short The Wise Little Hen in 1934, where he played one of the lazy animals in the fable, refusing to help the Hen make her bread and was thus denied a reward at the end. His distinct voice, given to him by Clarence "Ducky" Nash, singled him out for stardom. He quickly became a bit player in several other shorts before finally landing a role alongside Mickey and Goofy in 1935's Mickey's Service Station.

From there, he took off, gaining a supporting cast. In 1937's Don Donald he got a girlfriend, Donna (who was replaced by Daisy Duck in Mr. Duck Steps Out in 1940). In 1938 his "darling nephews" Huey, Dewey, and Louie came for a visit (officially in 1938's Donald's Nephews, but the story had been told in the comics a few months earlier). The nephews' mother, Donald's twin sister Della,[1] was never seen or heard from again, and Donald became their permanent foster parent. The next year, Donald's Cousin Gus, introduced Gus Goose, his cousin.

Donald was nearly the complete opposite of Mickey. Unlike The Everyman, he was brash, quick tempered, and loaded with faults. Because of this, audiences loved him, and responded to him very positively. In 1939 he got his own Newspaper Comic, and in the 1940s Carl Barks began making an entire comic universe based around him. Barks' role was eventually inherited by Keno Don Rosa, and the stories by these two creators are the only ones that are officially considered canon within the Disney comics universe.

World War II was especially good to Donald. A series of Wartime Cartoons showed him enlisting in the army, and he won his only Academy Award for Der Fuehrer's Face in 1943. It was also during the 1940s that he was featured in four entries in the Disney Animated Canon: Saludos Amigos, The Three Caballeros, Fun and Fancy Free, and Melody Time.

After theatrical shorts fell out of favor his appearances slowed, but he was never quite out. He appeared in DuckTales (1987) as a supporting character, and starred in Quack Pack. Appeared in a famous crossover with Daffy Duck in Who Framed Roger Rabbit?, got a segment in Fantasia 2000, reappeared with the gang in Mickey, Donald, Goofy: The Three Musketeers, and in 2005 he got a star on the Hollywood Walk of Fame. He also came back in Mickey Mouse Works and, more recently, Mickey Mouse Clubhouse. He appeared as a court mage in Kingdom Hearts, to say nothing of the few games he got to himself, such as the fondly remembered Quackshot.

And naturally, there are the comics. Donald Duck, unlike Mickey, has a specific universe associated with him. Whereas Mickey's father simply appears to be Walt Disney within the Disney franchise mythology, Donald's official family tree is very extensive and under strict canon rules. In many countries, Donald has his own weekly or monthly comic books and magazines: Double Duck and Paperinik New Adventures, to name a few. These comics often show just how much of a Badass that "loser duck" can be.

Tropes used in Donald Duck include:
Retrieved from "https://allthetropes.org/w/index.php?title=Donald_Duck&oldid=1826429"
Categories:
Cookies help us deliver our services. By using our services, you agree to our use of cookies.