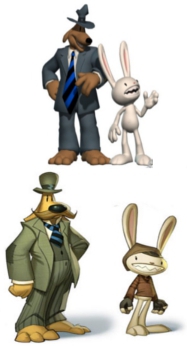 A character's descendant or ancestor is physically identical (or would be, except for small cosmetic changes) to the character himself, and often has the same name. A subsection of Uncanny Family Resemblance. Of course, he might just be his own ancestor.

This is normally the result of budget considerations when casting Time Travel stories, the consequence of having a long-term contract for a star when a show permanently jumps generations for some reason, or an excuse to do an Elseworld story with essentially the same character in a different setting.

If the character and descendant are actually one and the same, then that's My Grandson, Myself.

Despite the name, the trope is limited to neither males nor grandchildren.

This trope gets somewhat disturbing if you over-think it. Having one's grandparents look exactly like their grandchild and said grandchild's mate has pseudo-incestuous imagery.

Usually an Averted Trope by this point. Compare with Visions of Another Self. When it's the life story that's identical, the character is a member of Generation Xerox. In live-action productions is almost always the result of Acting for Two.

Generally the result of one of three things: A) It's simply cheaper to have an actor play their own ancestor than try to get a new actor to play them, B) Executives assume people are too dim to recognize that someone is a character's ancestor and thus a precursor to that character if you don't find some way to constantly remind them, or C) Both.

This can very well be Truth in Television, as some genetic phenotypes can skip generations.

Frequently results in a Hereditary Hairstyle.

Examples of Identical Grandson include: