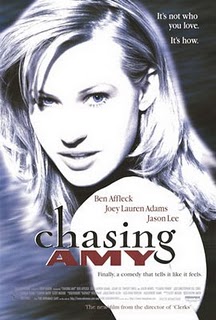 Chasing Amy is a 1997 romantic comedy-drama written and directed by Kevin Smith. It is the third film in the View Askewniverse series. The film focuses on two comic book artists: Holden McNeil (Ben Affleck), a heterosexual male, and Alyssa Jones (Joey Lauren Adams), a lesbian-identified woman.

The movie contains frank sexual dialogue, and was originally inspired by a brief scene from an early movie by a friend of Smith's, Guin Turner's Go Fish, wherein one of the lesbian characters imagines her friends passing judgment on her for "selling out" by sleeping with a man. In real life, Kevin Smith was dating Joey Lauren Adams at the time he was writing the script, which was also partly inspired by her.

The film won two awards at the 1998 Independent Spirit Awards (Best Screenplay for Smith and Best Supporting Actor for Jason Lee) and Joey Lauren Adams was nominated for a Golden Globe for Best Performance by an Actress in a Motion Picture - Comedy/Musical.

Dave Pirner of Soul Asylum was the Musical Consultant/Producer on this film and wrote music for it.

Tropes used in Chasing Amy include:
Retrieved from "https://allthetropes.org/w/index.php?title=Chasing_Amy&oldid=1829234"
Categories:
Cookies help us deliver our services. By using our services, you agree to our use of cookies.