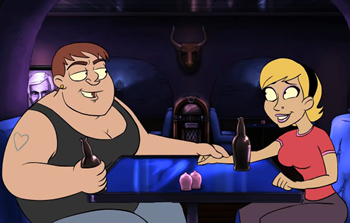 The one on the left.

Usually the contrasting counterpart to the Lipstick Lesbian, the Butch Lesbian (also known as the "bull dyke" in certain circles) is typically clad in heavy boots, dungarees, plain t-shirts and other distinctly un-feminine attire. She'll have a short haircut and a job as a mechanic, and often be taller and bulkier than her femme counterpart, or more rarely, short and boyishly skinny. Breast-binding is optional. She will also probably be the one who gets vocal about gay rights, persecution and the Male Gaze. She may also be quite sporty.

Traditionally, Butch Lesbians are paired up with high femmes (or Lipstick Lesbians, though the Lipstick contingent mostly stick together). The overuse of this trope sometimes comes under fire for allegedly enforcing the male/female dynamic in homosexual relationships, though it does exist in real life.

A saying within the gay community is that a Butch Lesbian is "steel covering velvet" while a Lipstick Lesbian is "velvet covering steel". That's not too much of an exaggeration.

In Japanese Anime and Manga, expect the Butch Lesbian to be portrayed in a more positive and possibly Fan Service inclined fashion. The name for a Butch Lesbian in Japanese is "tachi", which comes from the term "tachiyaku" (the player of a male role in Kabuki.). Also, she'll be likely to qualify for the Bifauxnen, Casanova, Even the Girls Want Her, and Prince Charming tropes.

The Butch Lesbian can be seen as the Distaff Counterpart to the Camp Gay stereotype (in embracing the conventional characteristics of the opposite sex). See also The Ladette, a heterosexual counterpart with several masculine personality traits.

Not always a mere stereotype, several Butch Lesbians in culture are self-depictions or nuanced portrayals by fellow members of the lesbian community.

Examples of Butch Lesbian include: