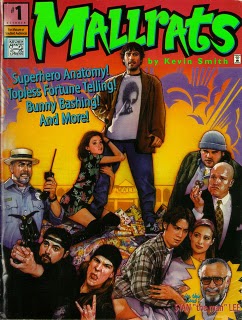 A 1995 film by Kevin Smith, and part of the The View Askewniverse. It is the second entry into this series, although chronologically set before Clerks.

T.S. and Brodie are comic-book loving slackers who have both recently broken up with their respective girlfriends. Seeking solace at the local mall, they find ways to sabotage their exes' plans and to try and woo them back. Like all Smith films, this film takes quite a bit of Refuge in Vulgarity. It was filmed in Eden Prairie Center in Eden Prairie, Minnesota, which at the time was a tired and dying mall with low traffic. (It has since been extensively renovated.)

Taking place a day before Clerks, with the usual parodies and Star Wars references (and a surprising cameo by Stan 'The Man' Lee).

Tropes used in Mallrats include:

Retrieved from "https://allthetropes.org/w/index.php?title=Mallrats&oldid=1830426"
Categories:
Cookies help us deliver our services. By using our services, you agree to our use of cookies.