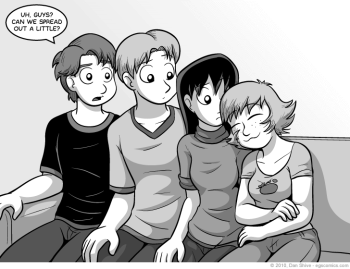 Alice has a thing for Bob. Maybe they've been friends for a while and she's ready for a Relationship Upgrade, or perhaps they just met and it's Love At First Sight, but regardless, she's perfectly smitten.

But there's one problem: Bob is gay, and he's already in love with Charlie.

A character has an Incompatible Orientation when they are coveted by someone who can never have them, because they just don't sway that way. They can be any character who has an incompatible sexual orientation to their admirer, and they will usually already be in a relationship with someone else. Note that this can also apply if someone is Asexual (not interested in a sexual relationship with anyone, male or female).

To meet the requirements of this trope the relationship must be stated as hopeless or impossible in-universe (by a character or through Word of God) at some point in time. This means that Incompatible Orientation doesn't have to be a permanent state of being, and attempts may be made within the plot to 'fix' it.

In a lot of works, especially Manga and Anime, this is often done mostly for amusement purposes, by turning the person in love into a Hopeless Suitor or even a Butt Monkey. Lesbians are particularly prone to receive this treatment, although others are not exempt from it.

Can be the result of Even the Guys Want Him or Even the Girls Want Her. The admirer may or may not be a Fag Hag or Hopeless Suitor. May overlap with All Love Is Unrequited and Gayngst. The reason why Sorry, I'm Gay is supposed to work. May be resolved if the admired decides If It's You It's Okay. Of course, some characters can simply resort to Jumping the Gender Barrier.

Compare to Settled for Gay, where they may have incompatible orientations, but they decided they probably wouldn't find a suitable suitor anyways. Compare also Last Het Romance, where the incompatibility causes a character to discover they're gay and break off the relationship. See also All the Good Men Are Gay. If a character informs someone about an Incompatible Orientation, it's either Sorry, I'm Gay or Dude, She's a Lesbian.

Truth in Television, of course.

Examples of Incompatible Orientation include:

Retrieved from "https://allthetropes.org/w/index.php?title=Incompatible_Orientation&oldid=1962061"
Categories:
Cookies help us deliver our services. By using our services, you agree to our use of cookies.