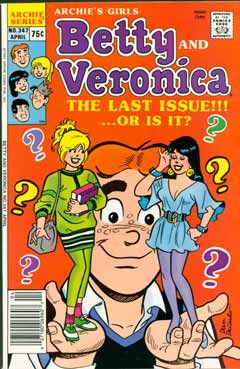 One of the most common types of Love Triangle, named after characters from Archie Comics, wherein the main character ("Archie") is caught between two love interests with drastically different personalities. "Betty" is the sweet, reliable, everyday Girl Next Door type (if done wrong, this can mean: 'kinda dull'), whilst "Veronica" is more alluring, exotic and edgy, but has a more 'troublesome' or 'dangerous' personality (which could translate to 'a bit mean'). This translates to their physical appearances; "Betty" will usually be more plain (or at least as close as Hollywood gets), whilst "Veronica" will be Ms. Fanservice in all her glory. As a rule, one will be blond and the other dark or red haired.

The usual dynamic is that "Betty", often the hero's best friend, is herself deeply in love with "Archie" (who might see them as Just Friends or being Like Brother and Sister, hence his obliviousness to her feelings), whilst "Veronica" is the sultry Ms. Unattainable who, despite attracting the hero's attention, barely notices his existence. "Betty" will want the hero to be happy and thus suppress her own desire to help the hero in his quest to win over "Veronica". Another possibility is that "Archie" and "Betty" are already in a relationship, but then "Veronica" starts batting her eyelashes, causing friction between the couple. Historically, "Betty" is the parents' choice, and "Veronica" rejected.

If the two love interests are male instead of female, they are often characterized as the kind-hearted, polite Nice Guy and the hunky 'Bad Boy'. It's not unusual for the main character to fall for the prince-like good guy who's probably rich but not in touch emotionally, and only later fall for the Tall, Dark and Handsome romantic rebel.

Whom the hero will end up with varies according to media, story, and values of the time period and culture where the story was made. Traditionally, "Betty" stood a better chance because she conformed to more 'acceptable' moral norms, whilst choosing "Veronica" would only lead the poor sap into ruin. Usually, the hero would spend the story chasing "Veronica" only to realize that "Betty" was The One—complete with a convenient 'appreciate what you've got' or True Beauty Is on the Inside Aesop. However, as attitudes to what is 'appropriate' sexual conduct have liberalized, it's more accepted for "Veronica" to have a chance at winning a happy ending too. Movies have traditionally favoured "Betty", but video games, comics and TV shows (especially long runners) have played this trope for all it's worth.

Comfortable and safe, Betty does not shake up your world. Picking Betty means you are happy with your life options and don't want to change things too much. Veronica is completely different from what you are used to. Veronica opens your mind to new possibilities and changes your world. Choosing Veronica suggests you are dissatisfied with the options life has given you and you want something else (even if you don't know what the "else" is).

In case this wasn't complicated enough, sometimes a Third Option Love Interest makes their presence known to shake things up even further.

Do be aware that fans like to exaggerate potential relationships; Shipping would not exist without it. As a result there are likely to be multiple instances of an Official Couple (vindicated by Word of God) that has some sort of Fanon-based "romantic rival" mirroring this trope. Even shows without such romantic entanglements in-universe can inspire Betty/Veronica debates amongst the Fandom; hence, Mary Ann/Ginger, Bailey/Jennifer, Janet/Chrissy, Velma/Daphne, etc.

Named for the two female leads of Archie Comics, which made this plot famous (although it's far older than that).

Before you add an example, consider which character is the Betty and which one is the Veronica. If you can't tell which is which, your example might fit better on a different Love Triangle page.

Examples of Betty and Veronica include:

Retrieved from "https://allthetropes.org/w/index.php?title=Betty_and_Veronica&oldid=1941266"
Categories:
Cookies help us deliver our services. By using our services, you agree to our use of cookies.