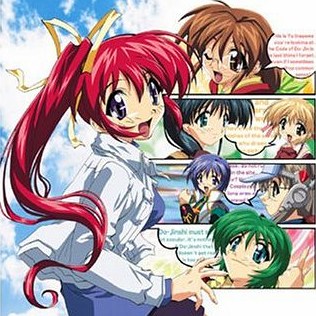 Comic Party, sometimes abbreviated to ComiPa, is a romantic adventure and Dating Sim Video Game by the Japanese game studio Leaf. It was first released on May 28, 1999 for the PC with adult content, but re-released with it removed for the Dreamcast, PC, and PSP. The main focus of the game is the creation of various dojinshi by the player's character, during which there are varied opportunities to interact with a cast of girls.

Comic Party is inspired from the real world event of Comiket (Comic Market) held in Tokyo each summer and winter. This is a convention where various artists gather together to share both parody, homage, and original work. Since the series was inspired by Comiket, it comes as no surprise that the "Comic Party" convention also takes place in the same building as Comiket, the Tokyo Big Sight convention center near Ariake, Tokyo.

Comic Party has spawned both a manga (illustrated by Sekihiko Inui) and an anime series since its inception, as well as a Dreamcast version of the original PC game which added a new character (Subaru) and removed the pornographic elements (reverse-ported to Windows, that version is called "Comic Party DCE"). Many artbooks, figures, and fan-made homages have been produced for it.

The anime series is licensed in North America by The Right Stuf International and the Sekihiko Inui's manga is licensed by Tokyopop. Comic Party Anthology Comic, a related manga originally published by Ohzora Publishing, is published by CPM under the title "Comic Party: Party Time", which is a series of doujinshi anthologies featuring stories by independent manga artists set in the Comic Party universe. Diverging frequently from Comic Party canon, this offshoot manga series includes more yaoi elements than the original materials. A more recent anime series, Comic Party Revolution, came out in 2003.

The game was ported to the PlayStation Portable (PSP) as Comic Party Portable on December 29, 2005. Promotional videos show that the Comic Party Revolution character designs are used, rather than the original designs from the PC and Dreamcast games and the first anime series. Characters from Comic Party are featured as partner characters Aquapazza: Aquaplus Dream Match, a fighting game developed by Aquaplus with characters from various Leaf games.

Early April, Kazuki Sendo is invited by his friend, Taishi Kuhonbutsu, to come with him to Tokyo Big Sight. He is surprised to see thousands of people waiting in line to get in. Apparently they are at Comic Party, a giant dojinshi convention. Once inside, Kazuki meets some of the dojinshi artists and is surprised to find himself enjoying their work. Taishi convinces Kazuki to draw dojinshi after their visit because he recognizes Kazuki's skill as an artist, but Kazuki's childhood friend Mizuki tries to talk him out of it because she believes otaku are smelly, dirty, and disgusting. Her reasoning does not help because Kazuki already made up his mind and begins to draw his first dojinshi.

Comic Party is a point-and-click first person perspective dating sim game. It is the player's task to decide the schedule of the main protagonist, Kazuki Sendo, as he prepares for the Comic Party convention that takes place once a month. How fast Kazuki can complete his dojinshi, how many copies he can sell at each convention, and what girl he is able to date depends on the player's choices. Only one action can be chosen on each weekday because Kazuki must attend college during the day, and two actions can be chosen on Saturday and Sunday. It is only on the weekend where the player is given the choice to leave the house and contact the girl the player wishes to pursue.

During the course of game, the protagonist will come in contact with other characters. These meetings composes mostly of text of the dialogue and actions that happen during the interactions. At certain points of the conversation, the player will be asked to choose between two or more actions that can affect the feelings of that person you are interacting with and can lead to other events.

The game begins on April 1 and ends on March 31 the next year. The ending depends on whether the player succeeds in winning a girl's heart. Although the player does not have to win a girl's heart to reach the end of the game, if the player fails at completing their monthly dojinshi before the deadline, the game will end early.

The Comic Party anime adaptation first aired in Japan on April 1, 2001 on UHF stations. Thirteen episodes and four ten minute specials were produced by Oriental Light and Magic and KSS and directed by Norihiko Sudo. The anime focuses on the dojinshi creation part of the game rather than the dating aspect and the specials are an original story involving the cast of Comic Party taking a vacation to a hot spring resort.

Comic Party was licensed in North America by The Right Stuf International and first announced at the Illinois anime convention, Anime Central, on April 20, 2002. It was released on four DVD volumes between March 30, 2004 and July 27, 2004. A number of re-writes and cultural changes was made to the English dub, as it was Americanized. Some examples include converting the Japanese yen to dollars (although the coins of the value is clearly seen), kimono to Versace summer dress, and replacing the "Panda Onseniko" or "Hot Springs Panda" that Eimi calls Yuu with "Stupid Panda". The changes were not made to the subtitles as they are correct translations of the original Japanese script.

Comic Party Revolution is a thirteen episode sequel. The first four episodes were directed by Jun'ichi Sakata and animated by produced by Chaos Project. The first episode was released on DVD on December 22, 2003 as the first part of a two episode OVA which was later extended to four episodes. These episodes were used as the first four episodes of the TV series that first aired on April 4, 2005 and ended on June 27, 2005. The OVAs were edited and cut in length to make the episodes fit in a normal television timeslot. Episodes five to thirteen was directed by Mitsuhiro Togo and produced by Radix. In Comic Party Revolution, Kazuki and Mizuki are now attending college and many of the events that take place in the game are hinted to have happened. Characters that were absent from the original series like Subaru Mikage and Asahi Sakurai make their debut. Kazuki is no longer the main focus in Revolution. Instead, the female cast roles are more equally distributed and some of them are given the spotlight in certain episodes.

Comic Party Revolution was licensed in North America by ADV Films for $30,336, which they announced at Metrocon 2006. ADV used their own voice talent for the English dub so the cast is different from the original series. Cultural changes were not made to the dub like the dub from Right Stuf.

A manga adaption of Comic Party was written and illustrated by Sekihiko Inui, who is also a dojinshi artist and continues to draw dojinshi under the dojin circle called Mix-ism. It made its debut in the January 2001 issue of the Japanese monthly manga magazine Dengeki Daioh and continued until the March 2005 issue. The chapters was compiled into five tankobon volumes and published by Dengeki Comics. Comic Party manga is licensed in North America by Tokyopop. All five volumes was released between June 4, 2004 and January 31, 2006. In the first episode of the original series, Kazuki has a dream set in the world of To Heart, arguably AQUAPLUS' most famous franchise. Kazuki is cast in the role of Hiroyuki, and a number of other familiar characters appear, including Akari Kamigishi and LEAF mascot Multi.

Anthologies of short pieces by independent artists was published by various parties including Ichijinsha, Ohzora Publishing, Square Enix, Rapport, Enterbrain and Sony Magazines. One anthology series called Comic Party Anthology Comic that is published by Ohzora Publishing is licensed in North America by Central Park Media. It was renamed to Comic Party and the first volume was released on April 14, 2004. Out of the nine volumes of the series, only three were published by CPM.

Tropes used in Comic Party include:

Retrieved from "https://allthetropes.org/w/index.php?title=Comic_Party&oldid=1857121"
Categories:
Cookies help us deliver our services. By using our services, you agree to our use of cookies.