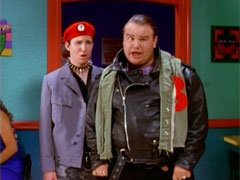 Bones: Hey Lumpy, you know how we were talking about the other day how we're in every single solitary movie ever, the fat guy and the skinny guy who are both thugs?
Lumpy: Yeah?
Bones: Do you think that's a throwback to classic character development, or just really shitty writing?


Lumpy: I pick the latter.
—The Nostalgia Critic's review of Pound Puppies and the Legend of Big Paw

This is where a fat and a skinny character make up a two-character ensemble. This is usually a comedy trope, usually with the skinny character being the Straight Man, although inversions of this are seen as well. Sometimes both characters are silly and this is often seen in the Terrible Trio type of villains, although there are also examples of heroic, or at least not villainous, pairs who fit this description. They often fit into the tropes of Those Two Guys or Those Two Bad Guys.

These two guys usually (but not always) have some specific characteristics that tropify their relationship: The skinny one has all of the ideas, and the fat one is also the strong man. The fat one is usually a dopey optimist, while the skinny one is cynical and refined. This pair, even in villain form, are devoted to to each other. If on the rare occasion the fat guy has a brilliant idea, either the skinny guy will express extreme surprise at the fat guy's ability to rub two brain cells together or the idea will be waved away as unworkable, and then re-appropriated two seconds later as the skinny guy's idea.

If these characteristics are not followed, then it's usually because the fat one is a brute who beats up the whiny skinny dude a lot. This behavior is rarely seen in protagonist pairings of fat and skinny.

Examples of Fat and Skinny include: