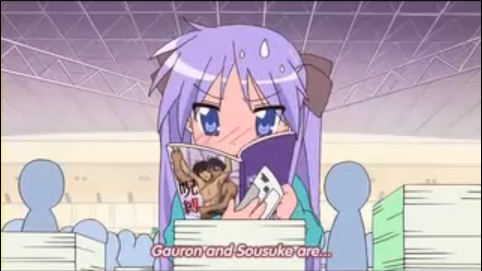 Yeah, most of it's kinda like this. To be fair, Gauron would probably be down with that in canon.

Japan's version of self publishing or independent press.

While doujinshi is traditionally represented as self-published manga, it literally means "amateur publication" and has come to be used as a synonym for any independently published fanwork. Doujinshi produced by a team is usually credited as a "doujin circle" rather than an individual pen name.

Notably, doujinshi may feature completely original content or content derived from an existing intellectual property. Printed doujinshi was traditionally published in limited amounts because of financial limitations. In regards to non-original content, this also assures fans do not step on the toes on the IP's original owners to any large degree, and many companies see amateur work as free promotion. Since doujinshi are also a way of dodging Executive Meddling, doujinshi are less subject to censorship; sexualized and otherwise trangressional depictions are infamous traits of doujinshi, though not actually representative of the whole. They're Best Known for the Fanservice, after all. They are also less subject to quality control (which also contributes to the stereotype).

In recent years,[when?] there has been an upswing in the activity of both amateur comic artists and professionals wishing to work "outside the system." Concurrent to this has been a support system enabling the production and sale of these works at a scale that few Western artists or writers could accomplish. The biggest semi-annual doujin sale convention, Comiket, has an attendance of some 500,000 people over each three-day event, making it the largest fan convention of any type in the world. Because of even tighter financial and legal limitations, doujinshi in the West is represented prominently, if not almost exclusively, on the internet.

The second most popular form of doujinshi is games, often programmed by one person or a very small group. Probably the most well-known of doujin soft producers, and one of the few ones to cross over into commercial game production is Type Moon'. The Touhou games constitute possibly the longest-running series of doujin game productions, since the first one was released in 1996 and there have been 19 games in the series, although there are other potential contenders to that throne. Game Mods and Visual Novels are a gray area, in that most are some sort of fanwork independently "published" as Freeware, so depending on exact definition anywhere from very few to almost all may count.

This has two effects upon anime. The first is that several highly regarded anime have been based on either doujinshi or on artists who established their presence as creators of doujinshi. This includes famous individuals such as CLAMP, Ken Akamatsu (who dabbles in both), and Yoshitoshi ABe (who created the original doujinshi Haibane Renmei is based on.)

The second effect is that a number of anime feature doujinshi as either primary plot points, or sideline elements. Involvement in doujinshi is usually a trait of Otaku Surrogates. Comic Party and Doujin Work are stories centered around it, while Genshiken addresses it as a fandom trait; Studio Gainax's Otaku no Video is essentially a fanciful self-biopic of the company's origins as a doujin circle.

Interestingly, the first doujinshi were made in America during the early 20th century. They were called "Tijuana bibles," and were eight-page porn comics usually starring cartoon characters or movie stars having explicit and often-comedic sex. (There have been guesses why they were called "Tijuana" bibles, but the reasoning is always obscure.) The creator of Li'l Abner famously said that he knew he'd hit the big time when Tijuana bibles of his characters began to surface. The first "doujinshi" to raise a major fuss was an underground comic called Air Pirates Funnies. After the first issue, the existing designs were replaced with Disney characters in rather explicit situations. This did not please Disney.

For a list of Doujinshi, see this page. See also Indie Game, for commentary on independent game publishing in general.

Examples of Doujinshi include: