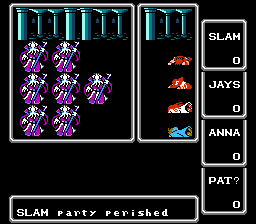 Demonic Spiders: the bane of players everywhere, these are the enemies that will make you scream in fury (or quake in fear) each time you see them. A product of poor (or, perhaps, malicious) playtesting, these are the guys which will defeat you over and over again using tactics that just seem unfair at times.

The defining trait of Demonic Spiders is that they are random or common (in the case of games where Random Encounters don't happen) enemies that seem unfairly powerful. These are not dangerous because they distract from something else, they are likely what kills you when you're distracted. They are not dangerous because they push you into hazards, they are enough of a hazard by themselves.

Demonic Spiders are the enemies that, for lack of a better phrase, have the deck stacked in their favor. They have more Hit Points, they go swifter, they come in swarms, attacking them deals damage to you, etc. Basically, these are the enemies with annoying abilities granted to them by the programmers that make them exponentially more dangerous than any other random enemy, but no less common.

Demonic Spiders are usually made up of many of the following characteristics:

Can overlap with Goddamned Bats. Particularly if RPG Elements are present, Demonic Spiders can become Goddamned Bats as characters level up. Compare: That One Boss, Contrast: Boss in Mooks Clothing who tend not to be so common, and Ledge Bats who are dangerous for more indirect reasons

Examples of Demonic Spiders are listed on these subpages:
Retrieved from "https://allthetropes.org/w/index.php?title=Demonic_Spiders&oldid=1952897"
Categories:
Cookies help us deliver our services. By using our services, you agree to our use of cookies.