The Computer Is a Cheating Bastard 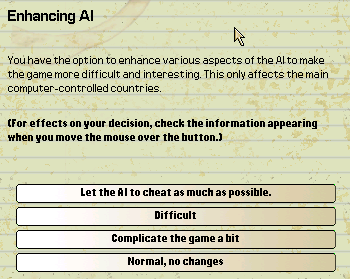 Most games aren't this honest.

The computer player is a cheating bastard whenever the "rules" differ between you and AI-controlled opponents. This can be a quick-and-dirty method of achieving a "level" playing field against a skilled human player (especially in older games, where hardware and AI capabilities were limited and prone to Artificial Stupidity), but can also create Fake Difficulty when the computer has access to moves that a human player (in the same context) clearly does not.

In ZX Spectrum forums such as news:comp.sys.sinclair, this phenomenon (real or imagined) is known as "cheatingbastness".

Some games have even used the fact that their AI is not a cheating bastard as a selling point. Conversely, arcade versions of games ("quarter munchers") often cheat more than home console versions.

Sometimes, the computer only cheats at higher difficulty levels—particularly conscientious games may even tell you how. These are often considered exceptions to the trope: The computer is still cheating, but it's not being a bastard about it—the equivalent of differing handicap weights in thoroughbred horse racing.

The Computer Is a Cheating Bastard does not include "fair challenges" of the game (wide pits, powerful/numerous enemies, etc.); those are Real Difficulty. Likewise, one should not accuse the computer of cheating simply because it plays to a computer's natural strengths (lightning reflexes, omniscient knowledge of the game rules, and so forth), or because you have a single streak of bad luck. Consistent bad luck, however, may be a sign that the computer is using the RNG to cheat. On the other hand, some cheats can actually work to the player's advantage, such as with the Rubber Band AI or plain old Cheat Codes.

Note that this is not a place to complain about enemies that have skills you don't have, or bosses who have stronger skills than you, or about how unlucky you are and how many times you missed (unless the computer has a different chance of missing with the same skill), or about how hard That One Boss is, or how the computer is actually half decent at some of the game's more advanced maneuvers that you happen to suck at. This is only for scenarios where it would be expected for the player and the AI to be on even footing. For example, in the campaign of a strategy game, it would be natural for the computer to outnumber you and/or have more resources than you—that's part of the challenge of a campaign. However, in free battle or skirmish mode, a computer starting with more resources than you is usually cheating, since you would expect to be on even footing with the computer (unless you can set what everyone starts with).

Sometimes this is justified due to the Rule of Fun. Computers are often prevented from using certain tactics that are open to the player, either because it's "cheap" when your enemies do it or there's no freaking way that a computer could manage to pull it off at a crucial moment. In order to make up the gap and still present a challenge, cheating is required. Ironically, players often think the AI is cheating when it isn't, such as strings of good luck from a RNG that is actually perfectly fair, while not noticing at all the subtle and behind-the-scenes ways that the computer is actually cheating. In fact, some games deliberately manipulate the RNG in the player's favour just to avoid the appearance of cheating.

Note: Since The Computer Is a Cheating Bastard is so incredibly common, only Egregious examples should be listed below, otherwise this entry would take over the entire wiki. Aversions or subversions should probably be left out as well, since that's (hopefully) the default.

Note: when adding examples here, please make sure whatever you're planning to claim is actually true, meaning you have hard data saying there is cheating going on, not just some vague feeling that you always hurt yourself in confusion and the AI never does. The phenomenon making you feel that way is almost definitely confirmation bias, as any of the various people who have done actual testing with hundreds of data points can tell you.

Almost every game that can have this trope does, so please post infamous examples only.

Examples of the computer not playing by human rules include:

Note: Since The Computer Is a Cheating Bastard is so incredibly common, only Egregious examples should be listed here, otherwise this entry would take over the entire wiki. Aversions or subversions should probably be left out as well, since that's (hopefully) the default.

Note: Since The Computer Is a Cheating Bastard is so incredibly common, only Egregious examples should be listed here, otherwise this entry would take over the entire wiki. Aversions or subversions should probably be left out as well, since that's (hopefully) the default.

Retrieved from "https://allthetropes.org/w/index.php?title=The_Computer_Is_a_Cheating_Bastard&oldid=1951397"
Categories:
Cookies help us deliver our services. By using our services, you agree to our use of cookies.