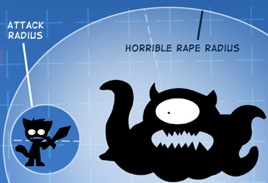 Sometimes the best way to make a powerful boss character is to make sure that they have really, really good melee/short-ranged attacks. So good, in fact, that it's just about impossible for a player character to get anywhere near this boss without ending up dead in a matter of seconds. This is because the boss in question is contained in an Instant Death Radius—an attack range in which they can easily kill you, but in which you are just about incapable of even getting close enough to touch them, let alone denting them.

Done well, this kind of enemy can force a player into using a very clear kind of strategy -- keep as far away from it as possible and use ranged attacks, or wait for an opening when it can't attack and strike quickly. But other times this kind of enemy can be incredibly aggravating when there's major character customization involved. Sure, you want to play a melee class, but guess what—the monster's attack radius is much larger than yours, and their attacks are substantially stronger. Level up as you might, mano a mano combat is going to result in your death no matter how many Critical Hits you land (generally zero—one if you're lucky). A Puzzle Boss may invoke this trope as a way of making it perfectly clear to the player that they're not going to beat it by conventional means, as will the Tactical Suicide Boss to ensure that the player waits for their opening. A Short-Range Shotgun may cause this effect.

Examples of the Instant Death Radius include:

Retrieved from "https://allthetropes.org/w/index.php?title=Instant_Death_Radius&oldid=1771468"
Categories:
Cookies help us deliver our services. By using our services, you agree to our use of cookies.