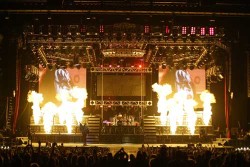 A huge rubber Satan has started inflatin',
He towers up over the drums.
Then pyrotechnics and stuff give a blast loud enough,
To rattle your teeth from your gums.
This incredible set is the best vision yet,
Of our stage designer's craft.
And it helps to distract the crowd from the fact,


That the music is really quite daft.
—Mitch Benn, Never Mind The Song (Look At The Stage Set)

Hard rock bands, and especially "Hair Metal" bands, with their aura of "Greek gods walking the earth," sometimes have a rather unfortunate tendency to rely heavily upon special effects such as fog, lasers or, more commonly, Impressive Pyrotechnics in their videos and stage shows. It's as much about the visual BANG as it is the music, sometimes more so—anything to perpetuate the notion that these beings are so far above and beyond us mere mortal music consumers that they actually alter the very nature of the universe.

This attention to visual detail can be partly blamed on MTV, which transmogrified music from an audio medium to a visual one in the 1980s. Suddenly everything bright and flashy was in, anything simple and straightforward was right out; and as MTV grew in influence, music video budgets rose accordingly, allowing bands to afford more spectacular effects. That meant more explosions. Woo-hooo!!!

Of course, nowadays we look back on those days long gone, and remember only the teased hairdos and the flashing lights and Roman candles. The music? Not so much.

Of course, not everything is about fire and bombs. Some bands, in an attempt to make a memorable video or concert experience, might take a trip into the outre with weird stage shows, odd props, or bizarre dramatizations with members of the band, roadies or even the audience. When it comes down to making sure you come back next year to see what they'll do, nothing is off limits.

Note: It should be emphasized that the presence or absence of theatrics or special effects does not necessarily equate with the absence or presence of musical ability, nor vice-versa; the two can co-exist quite comfortably. This article is intended to have a light tone; let's keep it that way, shan't we?

Examples of Great Balls of Fire include:

"[Drumming is like] counting with your whole body."
"Yeah... well, not your whole body. Unless you want to, I don't know, fart on a gong every sixteenth measure... I think Gwar do something like that."

"Now, we've never tried to summon a lake troll from the Finnish Necronomicon, so please bear with us. Here goes..."

Klavier: "I play new rock, not Great Balls of Fire!"