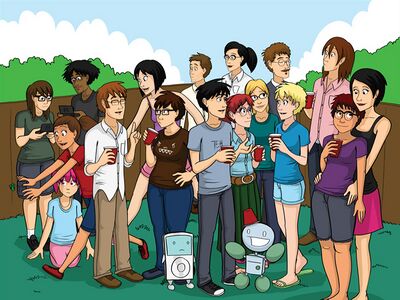 Marten Reed, an indie-rock fan living in Northampton, Massachusetts with an adorably sociopathic little robot, runs into a girl at a bar, Faye Whitaker, a barista who's just moved from Savannah and needs a friend, but adamantly no more than a friend. She then accidentally burns down her apartment building while making toast and needs a place to live— namely, Marten's couch. Before long, he meets Faye's sultry, gothy boss Dora Bianchi, and they have fun, hang out, and joke around.

Then, beginning at strip 500, everything changes. The strip eventually got to the point where it shifted from having Marten and Faye as the main protagonists to having a full-fledged Ensemble Cast. And then just when you thought everything was safe, everything changes again at strip 1800. Only this time, where the comic is headed next is even more uncertain.

One of the most prolific webcomics out there, with 3000 installments and counting, QC has evolved into a humorous ongoing chronicle of the lives of a group of twenty-somethings, as they deal with life, fall in and out of love, and maintain a healthy level of sarcasm. Would almost be a Slice of Life comic if the cast didn't include a handful of cute lil' robot sidekicks.

QC updates every weekday, with remarkable consistency considering that Jacques has no buffer whatsoever and usually draws the comic--on live webcast--that night. The comic itself can be found here.

Five print collections are currently out, the first ones featuring re-lettered and sometimes re-drawn versions of the first arcs.

Not to be confused with Questionable Consent.

It's also an open question when robots got full civil rights since it's the first thing the first AI asked for. However, earlier in the strip Pintsize and Winslow shrug off the idea of equal rights since it would mean equal responsibility. There was also Linux-based AnthroPC PT410x, who was a robot parody of the minority revolutionaries and who rejected any name other than his serial number as a "slave name." A Is can also voluntarily end up in menial jobs as appliances like toasters, humidifiers, and trash cans, which would seem more like an And I Must Scream situation to a human.

Retrieved from "https://allthetropes.org/w/index.php?title=Questionable_Content&oldid=1887000"
Categories:
Cookies help us deliver our services. By using our services, you agree to our use of cookies.