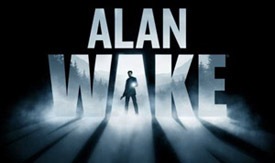 Stephen King once wrote that "Nightmares exist outside of logic, and there's little fun to be had in explanations; they're antithetical to the poetry of fear." In a horror story, the victim keeps asking "Why?" But there can be no explanation, and there shouldn't be one. The unanswered mystery is what stays with us the longest, and it's what we'll remember in the end.

A "psychological action thriller" for the Xbox 360 from Remedy, the developers of Max Payne, this game tells the story of Alan Wake, an author of popular and best-selling thrillers who suffers from a long case of writer's block. On a vacation to the peaceful town of Bright Falls with his wife, Alice, things start to get strange when his wife is kidnapped. Alan forgets an entire week and begins finding pages of a new book that he apparently wrote himself, but which describes the events that he is currently living.

These events revolve around a terrifying force of elemental darkness possessing the townspeople and attempting to kill him. Alan must fight back against the darkness by using light to weaken its hosts, while attempting to save his wife and discover the terrible secret of Bright Falls.

Influenced heavily off other major horror/mystery works, you could say it is Stephen King meets Twin Peaks, with a large dash of HP Lovecraft.

Most reviews of Alan Wake have been positive. In particular, many critics like the game's genuinely scary atmosphere, the creative uses of light as a weapon, and the episodic nature of the plot. It was chosen as Time Magazine's 2010 Game of the Year and nominated for 8 categories by Gamespot including Best Story, Graphics (Artistic) and Writing.

There was some controversy regarding the very high specs required to run the PC version. After the specs were announced by Remedy (to completely use CPU for particle physics instead of GPU or the failed PPU—Physics Processing Unit—card, requiring a 8-core CPU for full performance), Microsoft paid Remedy to drop making the game for the PC and release it as an Xbox 360 exclusive. However, a PC version was released in February 2012—just as octa-core CPUs began appearing in the market. It received similar critical reception as the Xbox version, and was profitable within two days of release.

An Xbox Live Arcade spin-off, Alan Wake's American Nightmare, came out February 15, 2012. You can see the trailer here. Rather than the first game's Stephen King, psychological feel, it was inspired by Quentin Tarantino, pulp and sci-fi horror, and urban legends. Remedy has stated that this is not Alan Wake 2, but a stand-alone title. Following the events of the first game, Alan finds himself inside one of his own Night Springs episodes and has to do battle with the darkness once again.

The series has many pop culture references and is exceptionally meta; Breaking the Fourth Wall is practically built into the plot and it sometimes goes several levels deep. Warning: Due to the game's story-heavy nature, some of the trope names below may be spoilers by themselves.

Tropes used in Alan Wake include:

Barry: What - what the hell was that? I saw it from the window - I saw - I saw something.
Alan: Forget about it, Barry. It's just me going crazy.

Alice (to Alan): Can you believe this place? This would make a wonderful setting for a book.

Manuscript: The flashlight was heavy in my hand, and each pull of the trigger sent a painful shock up my arm. But I was finally out of the woods and things were looking up. That's when I heard the chainsaw.

Tor Anderson: It takes crazy to know crazy!
Alan Wake: That's the sanest thing I've heard in a while.

Barry: Hey, Al. Lots of hours before dawn. Might as well get some rest. And by rest, I mean drunk.
Alan: Come on, Barry. This is -- Yeah, what the hell.

Alan: I was too late.

I am done with darkness! You're gonna buy me a tanning bed, and I'm gonna live in it!