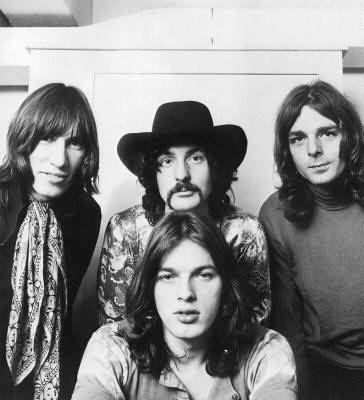 Their lyrics and their music changed drastically as the years went on. The band started in psychedelic rock and whimsical lyrics about childhood before heading towards more experimental progressive rock pieces. By the time of Meddle, they began to tone down the experimentalness and Epic Rocking, refining their signature sound and hitting the big time. The lyrics also began to become more weighty, mostly revolving around themes of isolation, death, insanity, and criticisms of modern society. The theme of isolation and society began to become more visible as Waters took more control of the band, and the band gained success with a series of complex Progressive Rock albums. Near the end of Waters' tenure with the band the music became heavier, more conventional and the lyrics became very personal. After Waters left, the rest of the band did a U-Turn and returned to their experimental sound; switching the lyrics to arguably focus on Gilmour's personal life instead.

Their guitarist, David Gilmour is widely considered one of the best rock guitarists ever, for his melodic solos and mastery of tone and vibrato; as well as his voice, which he sometimes uses to complement his guitar (singing either in unison or harmony with it). Roger Waters' lyrics are also held in high regard for their high quotient of satirical humour and general quotability, as are his strong basslines and his highly dramatic vocals. Keyboardist Rick Wright is the band's acknowledged "secret weapon" for his backing vocals (and occasional lead vocals) and jazz-influenced keyboard textures, which became a key component of the band's sound. Nick Mason...er, was the drummer. Mason gets very little (though not none at all) in the way of writing credits[1], vocal parts[2], or overall notice, but he ironically is the only member to have played on every Floyd record (Gilmour wasn't there for the first and Wright didn't play on The Final Cut). According to biographer Nicholas Schaffner, however, Mason was responsible for many of the band's signature sound effects.

(* ) Most fans also include More and Obscured by Clouds - soundtracks to two seldom-seen French hippie films (which are remembered solely because Pink Floyd did their soundtracks) - as a part of their studio album discography. It's actually pretty hard to find a few who don't, but those might get a little more frequent after Wiki/Wikipedia decided to remove them from the band's main discography and place them in a "soundtracks section".

The 1992 box set Shine On, which collected and remastered their albums from Saucerful to Lapse, also had an extra disc named The Early Singles, which for the first time collected (in mono) their non-album singles and BSides that had previously been scattered around various compilations like Relics and Works.

The band also spent several years in the early 2010s producing a reissue of expanded versions of their albums. The fans went wild.

Pink Floyd provides examples of:
Retrieved from "https://allthetropes.org/w/index.php?title=Pink_Floyd&oldid=1949023"
Categories:
Cookies help us deliver our services. By using our services, you agree to our use of cookies.